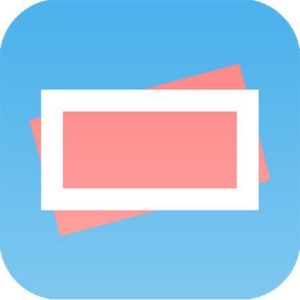 Pretty much every NLE has a built-in post-image stabilizer, be it Final Cut Pro X, Premiere Pro, HitFilm, etc. All are pretty good, and of course have different levels of success. Of course, our friends at CrumplePop have their solution, BetterStabilizer for FCPX and Premiere Pro, which promises a powerful and fast stabilizing solution. How does it fair – read on to find out!

The newest versions of image stabilizers in FCPX and Premiere Pro (Warp Stabilizer) are fairly good, but CrumplePop’s affordable plugin, BetterStabilizer, is actually better and analyzes and renders faster than the built-in features. 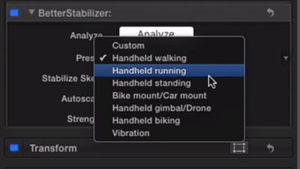 For this review, I used FCPX, and like other CrumplePop plugins, it’s easy to use. You drag and drop it onto the shaky footage, then open it in the inspector. From there, you click Analyze and select a preset, which includes:

You select how the footage was shot, and for my test using a walking clip, I selected Handheld walking. From there, BetterStabilizer will work to analyze, stabilize and render the footage quickly (of course, depending on your Mac’s specs, your results might vary a little). You can choose the strength of the corrections, stabilize skew, and Autoscale the resulting footage.

I thought BetterStabilizer did a nice job, and while FCPX’s built-in stabilizer only gets better with age and version updates, I like what CrumplePop has done. It’s very smart and very quick.

Below is the test results, a walking shot where the cameraman was holding the camera lower, not on his shoulder, and he makes a turn (and it’s intentionally shaky, as it’s a point-of-view shot). In the below clip, you’ll see the ‘raw’ footage, with BetterStabilizer and the built-in stabilizer found in Final Cut Pro X:

I believe this was a tough test for both stabilizers to correct, but I felt they both did well. It took less time for BetterStabilizer to analyze and FCPX to render vs. the built-in option, which is nice. I noticed the video almost had slight ‘waves’ to it, so I dialed back the amount. Same with FCPX. I’m not disappointed with the results by any measure, because it was an intentionally shaky image. I like how BetterStabilizer handled it.

In conclusion, I recommend CrumplePop’s BetterStabilizer as best option for stabilizing footage. It’s fast, and with the extra options of correction – how the camera was held (handheld or with a gimbal), moving or not, drone, etc., really is a game-changer. It’s $99, and you can find out more information and purchase here. Tech specs below.

One more thing I’d like to share is a story about the rise of excellent image stabilizers in NLEs, and how they helped change the way we film and edit.

Back in the mid-2000s, I was working on a very low-budget indie film. We had to get a walking and talking shot done, and the sunlight was fading fast. We didn’t have time to get our A.C., who was experienced with SteadiCam, to load up the gear and get over to where we were before the sun disappeared. So the Cinematographer, a very talented guy, did the shot with our HDV camera on his shoulder, walking backwards, with the OIS (optical image stabilizer) on.

The footage was pretty terrific, but just a little shaky. However, it was still just shaky enough that the director and editor decided to use the then-new image stabilizer in the 2006 edition of Final Cut Pro, and the results were stunning. You would think our A.C. showed up with the SteadiCam.

A new Premiere Pro CC 101 tutorial By Kevin P. McAuliffe (doddleNEWS) With the new release of the Creative Cloud, Premiere Pro has gotten some new updates that are welcome for any editor who uses Premiere Pro on […]

By Andrew Devis (doodleNEWS) The recent addition to Premiere Pro includes a new tab in the ‘New Project’ dialogue box called ‘Ingest Settings.’ This tab is designed both bring assets into you project AND for […]

By Andrew Devis (doodleNEWS) In this new Premiere Pro tutorial, I discuss the hidden bit! Yes, it is a feature in Premiere Pro where part of this panel is hidden, and not very easy to find unless […]