UPDATE 2 (4/29/19) – RØDE has released another new update for the RØDEcaster Pro Podcast Studio that extends it’s multi channel recording capability to the microSD card.  Before this update, users needed to record directly to a computer with an app that supports multichannel recording. Now the RØDECaster does it all. The update manages this feat using polyWave file format with stereo live mixing and individual tracks.

The Polywav file format packs all 14 tracks into a single file that includes the live stereo mix, a mono track for each of the 4 mic inputs, and stereo tracks for the USB, 3.5mm TRRS, Bluetooth and sound effect panels. All inside the same master sound file. That’s pretty impressive.

Other features in the new update include:

To activate the multitrack to SD recording feature, go into your hardware settings, under “advanced”. You will also need a microSD card fast enough to handle writing all that data on the fly. Check out their list of recommended microSD cards.

To do an offline mix of the PolyWav file, you need an app that supports that file format. But RØDE has thought ahead and updated their companion app to break out each track for you, so that your app can import them, if it doesn’t. Well done, guys!

UPDATE (3/1/19):  In firmware update vs. 1.1.0 RØDE introduces multitrack recording via USB, which was previewed at CES. Other features include:

The RØDECaster Pro will now record 14 tracks to your computer’s recording software via the USB output. These tracks are:

To activate multitrack output, access the ‘Advanced’ settings in the ‘Hardware’ section of the RØDECaster Pro’s touchscreen interface. From there, a single switch engages multitrack. You can record all channels at either pre or post effects. A stereo mix will also record to the microSD card.

RØDE has really changed the game with the new RØDECaster Pro mixing board, which can give content creators the ability to record content live and mix with a variety of additional audio assets. But many have been clamoring for multitrack recording option to take things to the next level. Well, you asked and RØDE answered with a firmware update that gives you up to 14 separate tracks of live recording capability.

The RØDECaster Pro makes creating your own online audio content incredibly easy as it gives users the ability to record from four separate XLR microphones, a Bluetooth connection for adding telephone calls from your smartphone, and sound effects, and pre-recordings from your computer via USB or through up to eight RØDECaster Pro Soundpads which enables users to record jingles and effects to be played back with simple touch of a button. 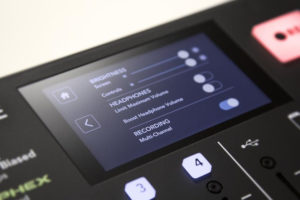 Announced at the annual National Association of Music Merchants (NAMM) show this week, firmware update 1.1.0 for the RØDEcaster pro will include the ability to record up to 14 separate tracks, including a stereo live mix track (which has been a feature since it’s release), a mono track for each of the 4 microphone inputs, to keep them separate and mixable, and stereo tracks for each of the USB, 3.5mm TRRS, Bluetooth and Soundpad channels. Other improvements include a tweaked user interface to make it more user friendly, and channel selection options.

Features break down as follows:

MULTITRACK RECORDING – The multitrack feature will record 14 tracks:
• A stereo ‘live mix’ track, as featured on the RØDECaster Pro since its release
• A mono track for each of the 4 microphone inputs
• A stereo track each for the USB, 3.5mm TRRS, Bluetooth and sound pad channels

Once installed, users can activate multitrack recording by accessing the Advanced settings in the Hardware section of the RØDECaster Pro’s touchscreen interface. From there, a single switch engages ‘Multi-Channel’ mode for multitrack recording. The only question though,  is whether the feature will record on board to the micro-SD card, or directly to your computer’s audio recorder via USB, or both. Knowing RØDE, I’m pretty comfortable with the expectation it’ll be multitrack recording across the board.

UPDATE: The firmware update for the Panasonic S1 and S1R is about to drop, and when it does, will also include improved image stabilization up to 6 stops, or dual IS up to 6.5 stops. There’s […]

The new Sony Cine Alta VENICE Camera version 2.0 firmware update, offers so many great features, that Sony is really crowing about it. And they’re not going to stop. We’ve had tremendous success (with the […]

By James DeRuvo (doddleNEWS) As a one-man or one-woman crew, you may be called upon to create voiceovers, or simple wish to lay down some music tracks for your project in your home recording studio. […]