The largest short film contest on the planet has just gotten larger, as the 2018 My RØDE Reel Short film competition has returned with over a Million Dollars in prizes!  And there’s more ways to enter with a whopping 30 different categories, making it bigger and better than ever.

“We’ve made it to the 5th year of My RØDE Reel. With our biggest ever $1 Million prize pool and even more categories to enter, we hope filmmakers around the world continue to be inspired to enter. Each year the film entries for My RØDE Reel get better and more creative – I can’t wait to see what incredible films our entrants have to offer in 2018, and I am really looking forward to meeting the winner of The Pitch.” –  says Damien Wilson, CEO of RØDE Microphones

In addition to the size of the prize kitty that RØDE has put together, the competition has also grown in the number of total entries. Since it’s inception in 2013, My RØDE Reel has reached over 1500 entries from over 80 countries last year. And this year should be even larger. 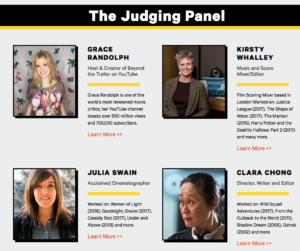 But with all the growth of this great short film competition, the rules are essentially the same: Entrants are required to submit a short film of three minutes or less, plus a behind the scenes featurette that prominently features the RØDE products that contestants have used in creating their short film entry. And to sweeten the pot, Rode is offering a free dead cat wind shield with the purchase of any VideoMic Pro or Pro+ mic you buy for the competition (see website for details).

That’s pretty much it, with the exception of owning the copyright to any music used, and you must use the My RØDE Reel bumpers included in the downloadable Starter Pack.

The best behind-the-scenes film awards include:

Additionally, There is a new category for 2018 called “THE PITCH,” where competitors will be able to submit a 2 minute show reel pitch to win a year-long, all expenses paid job at Video Content Producer at RODE HQ in Sydney, Australia. A list of each individual prize package can be seen here.

Entries will be accepted from now until midnight, July 31st, 2018. To enter and download your Starter Pack, head over to MyRodeReel.com. And if you enter, drop us a note on Facebook or Twitter so we can root for you!

Make Your Film In Australia For My RØDE Reel

Update: Just a few days remaining! Click here to submit. By James DeRuvo (doddleNEWS) We’re still a couple of months from the 2018 My RØDE Reel competition getting started, but RØDE is looking to bring a […]

By James DeRuvo (doddleNEWS) The Moment Invitational Short Film Festival is over and there’s an official winner. Selecting eleven mobile filmmakers to compete in a film festival style competition, viewers voted for their favorite and […]