When I made the switch from my tried and true iPhone 6S Plus, to the iPhone X, I had to think long and hard about it.  It was a non trivial decision, especially from an audio capture point of view. Gone would be that venerable mini headphone jack that the RØDE VideoMics would attach to. Sure, I could use Apple’s pricey adapter, but even then, I couldn’t use my VideoMic Me, which attaches to the camera itself. Thankfully, RØDE has solved the problem, as I knew it would.

Launched with a laser like focus square at the mobile filmmaking community, RØDE opted to launch the new VideoMic Me-L at VidCon 2018, the annual confab for YouTube and other content creators that takes place here in Southern California during the summer. But this was the first trip that RØDE has made from down under to attend the event in force, and as such, they used the marquis event to give us a new mic that’s been long overdue. “Vidcon is the perfect venue for launching the VideoMic Me-L, as 50,000 emerging online creators all are looking to create the best content they can. With sound quality 50% of any decent video experience, the VideoMic Me-L is the perfect choice for today’s creative generation.” 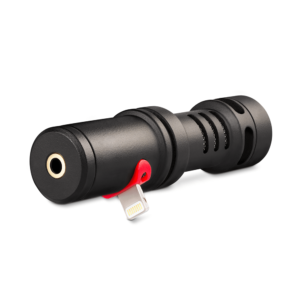 Based on the very successful first generation VideoMic Me, the L series is essentially the same microphone, but with the analog centric 3.5mm minijack plug replaced with the all digital lightning connector for iOS devices. This makes the VideoMic Me-L ideal for vloggers, musicians, and other content creators who rely on iOS to craft both audio and video content.

“The original VideoMic Me is one of our most accessible mics and the world’s most popular microphone for mobile audio,” says Damien Wilson, RØDE CEO. “The new VideoMic Me-L’s Lightning connector and plug-and-play functionality is a great addition to the VideoMic family, introducing the latest iOS devices to RØDE’s made-for-purpose mic.”

I have the first generation VideoMic Me and it’s fantastic for on the go mobile shooting in the run and gun style, or even for capturing that Kodak moment, when you want to turn the dial up on the quality of audio coming into your iPhone. And I expect the L series to be no different. 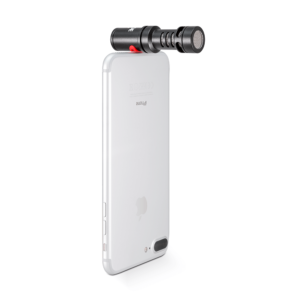 The benefit is, that the directional microphone not only cancels out all the surrounding sound, except where you’re aiming your microphone, but it also has it’s own dedicated digital preamps for superior signal processing before sending the audio to be written to your iPhone in the video.  The L Series lightning connector also works in both forward and rear configurations, so that the Vlogger can get in on the action, even when they aren’t on camera.

Like its predecessor, the L Series also has a 3.5mm stereo play-through mini jack, so that users can monitor the audio live. A few thoughts though. First, the 3.5mm stereo play-through minijack means that you’re going to have to use Apple’s lightning to analog adapter to use headphones for monitoring. It kinda makes sense, but if a user is already using a modern iPhone, they’ve long done away with their analog earbuds. It would’ve made more sense to make it a lightning port, and then anyone using older earbuds, could rely on the adapter. That would’ve kept everything digital.

The other thought is that Apple is rumored to be shifting to USB-C with the next iPhone model. So if that is indeed the case, the L-Series may have to be redesigned again in short order, or users will be back to square one, using an adapter.

The RØDE VideoMic Me-L also comes with a deluxe “dead cat” furry for shooting in windy or adverse weather. Supports all lightning connected iOS devices with iOS 11 or higher.

No word on pricing or shipping date just yet, but the previous model is currently selling for around $60 US (75£) and some sights are listing the L series for around the same price. Stay tuned.

RØDE is at it again. This time focusing on how to get the best audio wirelessly into a mobile device. And by the looks of the compact Wireless Go, everyone is going to be mic’d […]

Recently, RØDE Microphones shipped the next addition to their rock solid kit line of microphones. We’ve already taken a look at the RØDE Wireless Filmaker Kit and a host of other great RØDE mics. Now it’s […]