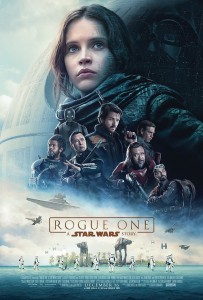 As expected, Rogue One: A Star Wars Story enjoyed a massive opening weekend around the world – raking in $290.5 million in global box office receipts.

That’s the second biggest domestic opening for a December release ever – behind franchise sibling Star Wars: The Force Awakens, which grossed a record-breaking $936.67 million in North America, on its way to bursting $2 billion globally.

Even more encouraging for the studio, and director Gareth Edwards, is that Rogue One is yet to open in China – which will become the world’s biggest movie market in 2017. And its impressive $135.5 million foreign ticket sales position it behind The Force Awakens ($281 million), box office titan Avatar ($164.5M in 2009) and The Hobbit: An Unexpected Journey ($138M in 2012) in the history books.

The picture, which is set directly before the events of Star Wars: A New Hope (1977), also had the third highest opening weekend of 2016 (behind Captain America: Civil War and Batman V Superman), and the 12th of all time. Forbes has estimated that Edwards’ film is on course for a huge $585 million total in North America.

While Rogue One lags behind The Force Awakens’ colossal box office takings, it is distinct in being the first Star Wars picture not that isn’t an official prequel or sequel, aka, a ‘Saga film.’ As a result, it features few familiar lead characters from the original series – with the obvious exception of Darth Vader.

Fans, along with critics, have responded well to the movie, which is packed full of nostalgic touches and references to George Lucas’ classic original.

Boasting a sizeable $200 million budget, Rogue One looks set to easily break through the coveted $1billion barrier at the worldwide box office. The big question is, how high can it go?