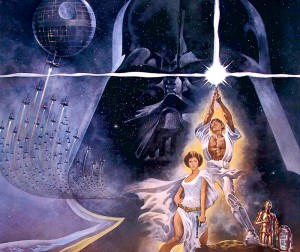 Rogue One: A Star Wars Story is out in theaters, and loads of news is coming in about making that film and how it ties into everything. Characters from the movie will be reintroduced in Star Wars Rebels, and we may even see events from the film in that animated series.

But sometimes something else slipped out…. In an interview with Little White Lies, Rogue One director Gareth Edwards revealed that there is a 4K restoration of Star Wars: A New Hope. Here’s what he told the outlet:

“On day one, we were in Lucasfilm in San Francisco with Industrial Light and Magic and John Knowles, our supervisor, he said that they’ve got a brand new 4K restoration print of A New Hope – it had literally just been finished. He suggested we sit and watch it. Obviously, I was up for that. Me, the writer, lots of the story people and John all sat down, we all had our little notepads, we were all ready for this. I’ll add that I’ve seen A New Hope hundreds of times.

“So I was sat there, ready to take notes and really delve under the surface of the film. You have the Fox fanfare, then scrolling text with ‘A long time ago…’, and then the main music begins. Next thing we knew it had ended, and we looked around to one another and just thought – s–t, we didn’t take any notes. You can’t watch it without getting carried away. It’s really hard to get into an analytical filmmaker headspace with this film. It just turns you into a child.”

Most likely the 4K restoration is meant for next year’s 40th Anniversary of the release of Star Wars: A New Hope. This brings up a ton of questions, with the foremost being which version of the movie has been restored?

Interestingly enough, a year ago we heard rumors that a Blu-ray version of the original cut exists, and while nothing came of those reports (or can the original cut be released, though some fans have done their best) the fact that Edwards says he watched a 4K restored print on day one, hot off the press, brings up the possibility that the rumor is correct.

Edwards was hired to direct Rogue One in May 2014 along with screenwriter Gary Whitta, which would place this happening long before those rumors. It also means that a 4K restored print has been sitting on the shelves over at Lucasfilm for as long as two-and-a-half years.

That could also mean that Lucasfilm has been planning for a 40th anniversary for a while now, though keep in mind Fox owns the rights to it forever (barring Disney paying a lot of money to get it). Having completed A New Hope that long ago points to the possibility that the studio could also have completed work on Empire Strikes Back and Return of the Jedi, which Fox also owns the rights to, but until 2020 (per Screen Rant, who has a great article on it). I’m going to assume they’re the Special Editions, since those are considered more canonically correct and so I don’t get too excited if it turns out there’s no 4K restored print of the originals.