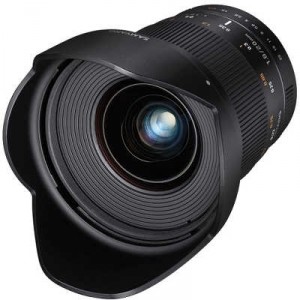 Samyang has announced a super fast 20mm lens as part of their ongoing 2016 Summer Samyang Blockbusters promotion, where they planned to introduce five new lens over the course of five weeks that began on July 18.

The lens is features a bright aperture along with Samyang’s Ultra Multi Coating (UMC) which offers an improved optical performance. The camera also has a wide 94.8 degree angle of view and uses quiet and smooth de-clicked focus and aperture gear rings which are perfect for filming as well as an incredible close focus of 0.2m (~8″). Here’s what Samyang says of the cine lens:

“The bright T1.9 aperture secures a fast shutter speed even under the restricted lighting conditions to offer best quality images. It will brighten up your everyday snapshots. Also it creates an outstanding out-of-focus look by highlighting the main object effectively.”

The lens utilizes 13 elements of glass in 12 groups of which there are 2 aspherical lenses and 3 extra-low dispersion lenses per lens. This minimizes aberration and unnecessary light dispersion, and deliverers a high resolution from the center of the image all the way out to the corners.

Here are the list of features and technical specifications for Samyang 20mm lens (and you can get more information here):