From filming to special effects, the Star Wars saga has set a standard by which many event blockbusters are now modeled after. And while not perfect, it draws from the classic story telling technique called The Hero’s Journey, by Joseph Campbell.

This tried and true storytelling method can be used for just about any story you want to write, from comedy to adventure. With that in mind, I thought we might want to take a look at Star Wars through Joseph Cambell’s lens, since that’s how George Lucas wrote it, and see how took us us from the deserts of Tatooine, to the Jungles of Yavin 4.

Like any classic story, Star Wars hits the ground running by quickly introducing us to the world we find ourselves in — this is important, and we illustrate it in this article on Act I and the first 10 pages. As the movie opens, young Princess Leia gets captured by Darth Vader and the Empire (the dark force of evil), but not before giving the plans to the Death Star (a MacGuffin) to her two droids, and a message to Obi-Wan Kenobi. We never see the plans until the very end, but they will drive everything that happens from now until the end (and that’s what a MacGuffin is).

The Droids manage to escape the ship and crash land on the desert planet of Tatooine. Once on the planet, they split up, but both are eventually captured by merchants seeking to make a fast buck selling their new found technology (this is called the Hand of Fate). And this is where we meet our hero, Luke Skywalker, a farm boy whose Uncle buys the droids.

Luke wants to leave the planet and join us friends at the Academy, but his Uncle Owen keeps him on the farm, saying he needs him for just one more harvest. You can tell by Uncle Owen’s attitude that he knows more than he’s letting on, because he secretly knows who Kenobi is, and who his father was, and he tells Luke to forget it. Owen is known as a threshold guardian, who seeks to protect Luke from the hand of fate that is coming his way, because he knows what happened to Luke’s father.

But when Luke is tasked with cleaning the droids, he comes across across a mysterious recording of the princess, begging Obi Wan for help. In the Hero’s Journey, this would be considered Luke’s call to adventure, and it starts with a simple question … “Who is she? She’s beautiful.” Mesmerized, he tries to find out more, but the message disappears. Before he can find out more, R2D2 escapes, trying to find Obi-Wan Kenobi. So before Luke can even answer the call, the droid forces his hand and he has to go after him. He not only finds the droid, but also General Kenobi, who saves Luke and the droids from an attack from the deadly sand people.

Obi-Wan Kenobi is known as “the wise old wizard,” in our story. The guardian who will guide Luke and look after him on the adventure that is calling him. Kenobi has a history, not only with Princess Leia and the Empire, but also with Luke’s father, who ‘died’ before Luke was born.

R2D2 plays the complete message of Princess Leia, outlining how her mission was to bring Kenobi to her father with the plans, but she’s been captured. She begs his help. Kenobi gives Luke his father’s lightsaber (known as the Magic Talisman, a symbol of the life his father led) and tells him his father was a great warrior and pilot, something Luke aspires to be.

And thus, Luke must make a choice. But he hesitates, torn between his desire to go, and his family responsibilities. So he denies the call. Offering to take Kenobi to a space port on his way home, they encounter the burning hulk of the merchant Jawas’ transport. The Jawas are dead, killed by the Empire, and Luke knows where they’re headed next.

But when he gets home, his Aunt and Uncle are dead, and his home destroyed. The hand of fate drives him again, and there’s no turning back. And so Luke answers the call and decides to go with Kenobi.

Here we arrive at the first “plot point.” Screenwriting guru Syd Field defines a plot point as a moment before the end of the act that serves as a launch point for the next, in this case, Act II. In this case, Plot Point 1 is Luke deciding to go with Kenobi and the droids to find a ship and head to Alderaan to take on the Empire, and Act One comes to a close. For more on Plot Points, check out this article.

Here is a look at the Hero’s Journey, visually: 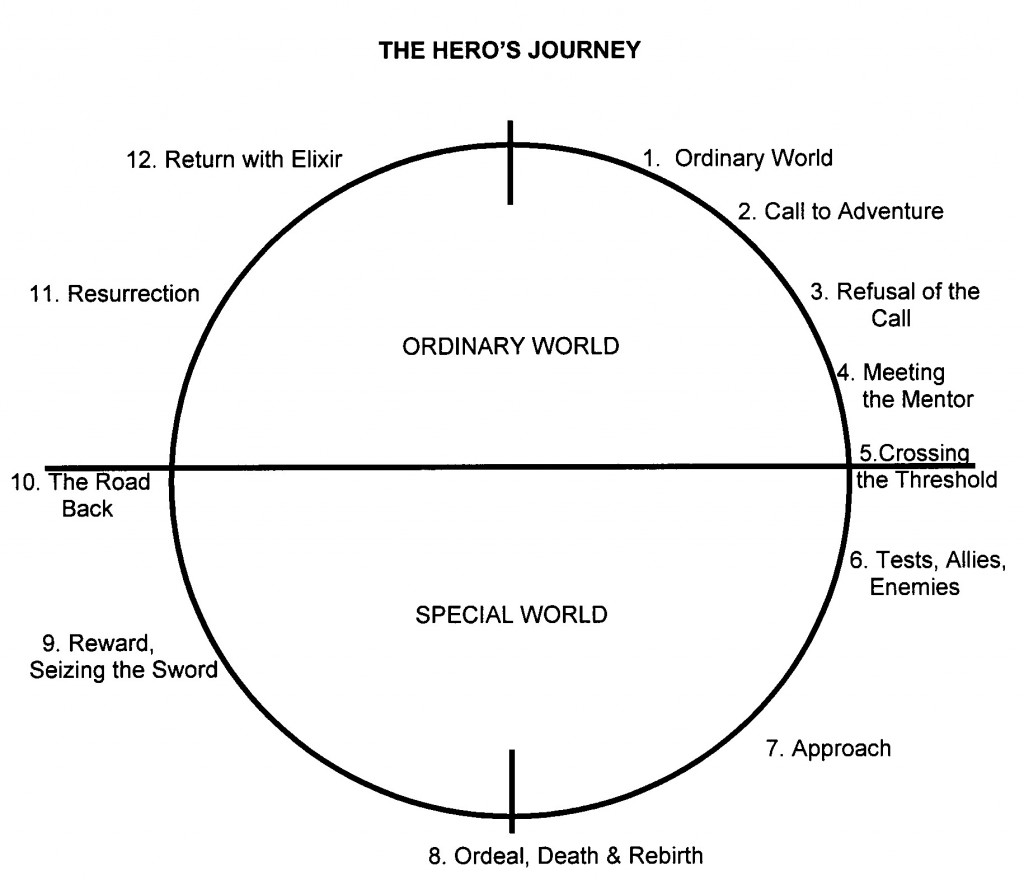 By Brock Cooper (doddleNEWS) Anyone who has written a story or screenplay knows that the hardest part is the ending. How many people have watched a movie and thought it was great, but ended up […]

By Brock Cooper (DoddleNews) When was the last time you watched a movie and thought, “Wow, that was an awesome hero?” You probably remember the bad guy far more than the good guy, am I […]

By Brock Cooper (doddleNEWS) It’s not easy to get into the screenwriting business and it’s even harder to stay in. You can’t walk through Hollywood without bumping into someone that has a script to sell […]