When I sit down and write a screenplay, it’s very much a fugue-like state. The first draft is a mixed batch of pure chaos and artistic inspiration. As I go from one draft to the next, chaos is slowly removed and perfect prose is left in its place.

When you watch a movie, and there is a particular line that sticks out like “You had me at hello,” or “Good, bad, I’m the guy with the gun,” it is the result of a writer pouring over the script for many hours. When the script is done, there are always those lines that are our personal favorites, and we hope will become personal favorites of yours. 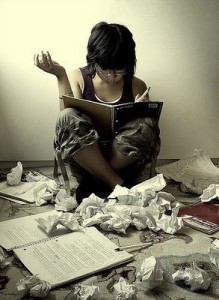 These are the lines that we fight for because they seem to fit perfectly with the scene, character or just sound frickin’ awesome. It’s like someone trying to tell Sylvester Stallone, “Ya know Sly, I’m just not feeling it when you say, ‘Yo, Adrian.’ Can you change it to ‘Hey, Adrian’?” or if Scarface was changed to “Say hello to my vertically-challenged friend.”

The problem comes when what you write looks great on the page, but when it’s acted out, just doesn’t fit. In my most recent screenplay, I was proud of the the phrase “meat bullet,” which the lead used to describe how her body was propelled through a windshield during a car accident. The phrase just exemplified the malice and contempt she had for the accident and what it did to her.

When I talked to the producer during the first drafts of the script, I told him how much I liked that phrase, and it stayed through two drafts of the script. Recently, I had the opportunity to view some of the audition tapes, and they used that scene. Every time a person read that line, the phrase stood out…and not in a good way.

When it was acted out, the phrase messed up the pacing of the dialogue. It seemed fine in my head and read on the page, but when placed into an actual conversation, threw the pacing off completely and actually sounded…I hate to say it…corny.

The phrase that I was so proud of and fought for throughout the script is going to be thrown out with my blessing. As a writer, I attempt to craft the perfect dialogue and turn a clever phrase. Most of the time it works and unforgettable phrases are made, but sometimes you have to “kill your babies,” to use an old journalism phrase.

There is definitely a difference between how something looks on the page and what it sounds like when acted out. One of the hallmark qualities of a good writer is knowing when to take out something you love, because if it doesn’t sound right on the screen, then you have failed your audience.

Pitch Perfect: The Art of Pitching Your Screenplay

By Brock Cooper (doddleNEWS) The key to getting your screenplay on the silver or small screen is making sure the right people see it. Agents and studios receive hundreds, if not thousands, of scripts and […]

Screenwriting 101: Getting Your Script Out There – The Agent

The dream of every writer is to have someone in the industry representing them and getting their product to the right people. An agent is someone that knows people in the film industry and works […]

By Brock Cooper (doddleNEWS) In Part I of Great Characters, I told you what made a great character in your screenplay. In this article, I’m getting down to brass tacks on exactly how to do […]