For over a year we’ve known that Shane Black (Iron Man 3) was writing a new Predator film with the option to direct, and for nearly 2 years, that’s pretty much all we’ve known.

The series has somehow survived despite the weak sequels, and even weaker spinoffs, which pitted the Predators against the Alien Xenomorphs. The 2010 film, Predators, originally written by Robert Rodriguez in the 1990s, was supposed to revitalize the franchise, and despite being a marginal success, with mixed-to-positive reviews, 20th Century Fox decided to refresh the franchise yet again.

Published to the official Predator Facebook page and captioned “Here we go again, bro,” we’ve finally got our first look at the upcoming film as well as the possible title for the new film. Check it out below! 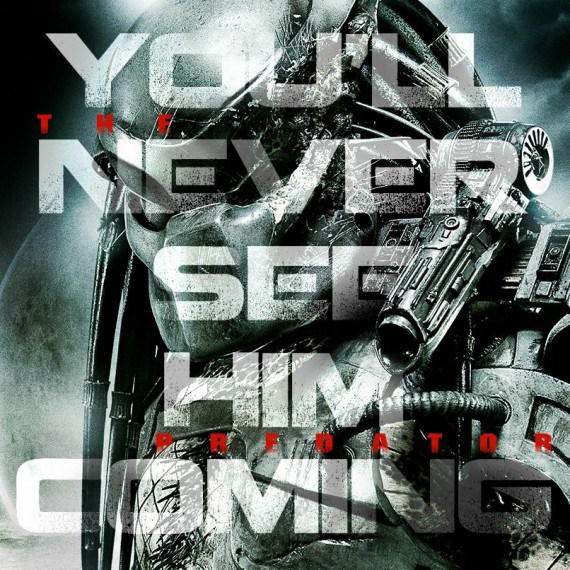 Right off the bat, I love the title! The Predator. Really simple and evokes the original film, with the only change being the addition of the word “the” to it. I can’t help but feel that Black and co-writer Fred Dekker (Monster Squad) really want to go back to the original concept, especially when you consider the choice of the title.

If the poster is showing off what the new Predator will look like, then the design of the creature hasn’t changed in any significant way. Stan Winston designed a perfect creature for the original film, and for all the boneheaded ideas they put in the Alien Vs. Predator films, no one has been dumb enough to mess with that design. This falls pretty much in line with Black saying the film will be a sequel and not a reboot or remake.

What else do we know? Shane Black hopes to make an R-Rated film, and with the recent success of Deadpool (which was also distributed by 20th Century Fox), it’s a good bet he’ll get it. The new film won’t ignore any of the previous films, so we’re looking at a direct sequel and not something tangental.

Black has said that the Predator movies have a fascinating backstory that has never really been explored. The only thing I can think of is that they’ve been hunting the best of mankind for centuries, so I’m not sure how he’ll tie that in.

It’s still pretty light on details, and we still don’t have a release date for The Predator, but at least clues are starting to trickle in.