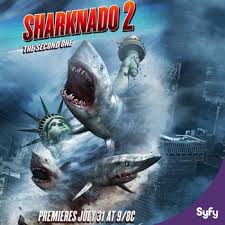 The network added that the film also attracted 1.6 million viewers in the 18-49 demographic that advertisers covet.

On Twitter, Syfy, a unit of Comcast Corp’s NBCUniversal, said “Sharknado 2” garnered 1 billion impressions across conversations on the micro-blogging site, and was also among the top trending topics of Wednesday evening.

The popularity of “Sharknado,” which drew an audience of 1.4 million with its July TV premiere last year, created a social media frenzy that drew larger audiences to rebroadcasts of the film, and led the network to release “Sharknado” in 200 U.S. movie theaters.

Syfy is continuing the shark attacks with “Sharknado 3,” due out in summer 2015.

By James DeRuvo (doddleNEWS) Believing that they have stumbled across the next great wave of content creation, Facebook has begun experimenting with the mobile-centric format of vertical video. Have they lost their minds, or are […]