We’ve seen a lot of these streaming studio boxes. From Switcher Studio’s iPhone centric-system, to Blackmagic’s Web Presenter and BoxCast’s paperback book-sized 4K device. It’s a fast growing category, and thanks to Facebook Live and YouTube Live, everyone wants to get into the game. But with SlingStudio, you get the the ability to stream from up to 10 cameras and smartphones wirelessly. That’s huge!

Calling it the industry’s first affordable wireless multi-camera video production system, Dish says that SlingStudio stands out because of the sheer number of wireless camera connections that the system can support. With it, users can record, switch, edit and broadcast high-definition content in real time to Facebook Live or YouTube.

Here’s how it works: 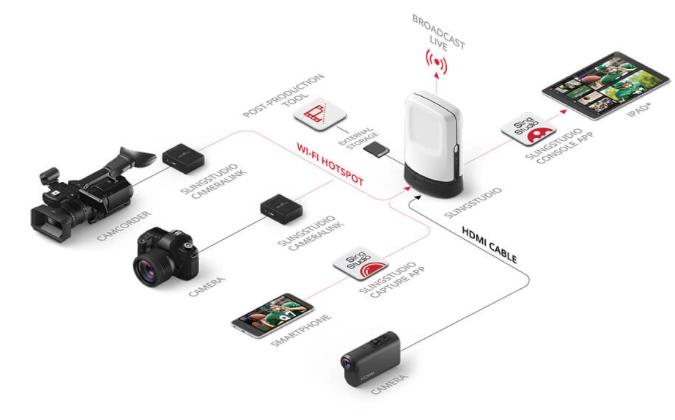 SlingStudio works as a private, video-grade ad-hoc WiFi network that you can connect up to ten HDMI-enabled cameras, courtesy of the Sling CameraLink wireless adapter. The adapter can plug into any camera with an HDMI port and can transmit 1080p video at up to 60 frames per second (fps) from 300 feet away for up to two hours of broadcast time.

You can also directly connect mobile devices like a smartphone or tablet to the Sling Hub, as well, with no additional wireless connectors.  Sling can also connect to external audio sources, mixers, monitors, etc. 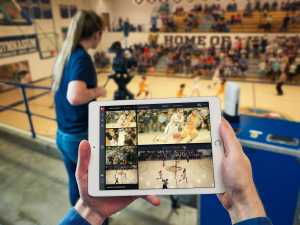 SlingStudio’s iPad console will then allow you to direct your live stream, with camera switching, live to tape video, drag-and-drop video with transitions, picture-in-picture, split screen and quad views for talking head interviews, and more. Users can also mix audio and add text overlays and lower thirds, just like a professional broadcast.

The live stream is then broadcast as well as being simultaneously recorded to a USB external hard drive, SSD, or even an SD card for archival and post-production sweetening. But not just the live steam itself, but also the raw footage from each camera, all stored in the same location to make it easier to access when editing in Adobe Premiere or Final Cut Pro X with the SlingStudio Plugin.

Other tech specs include:

Now here’s how much it costs:

The SlingStudio Hub is $999. Each Wireless HDMI transmitter is $349. Additional batteries are $149, and a USB-C expander for Gigabit Ethernet or external recording options is $49. So if you have a two camera production, plan on spending about $2,000 to get into the game. But if you’re have a bunch of iPhones lying around, all you need is the free SlingStudio Capture App, and you can connect them to the SlingStudio hub and broadcast for half that price, while your iPad or tablet is controlling the whole show.

Great for churches, weddings, local sporting and news events, concerts and corporate presentations, SlingStudio is a million dollar TV studio for under $2,000. It’s a brave new world out there, and it’s going to be broadcast live. For more information, visit myslingstudio.com.