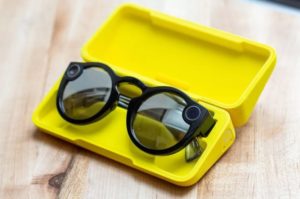 When SnapChat first released the Snap Spectacles, I thought it was an oddity, a fun way for the selfie generation to get out of their narcissistic tendencies and record the world around them. And for the most part, it worked, though it was a sluggish, and limited experience thanks to its circular imagery.  But the company has made some changes to version 2 of the sunglass mounted social camera, that could make them far more useful, and maybe even for filmmakers to experiment with.

The basic idea behind Snap Spectacles, were to add content to SnapChat. They shot a proprietary circular still image or 10 seconds of video that could then be downloaded to your mobile device and shared via the social media app.  But due to it’s circular image, they didn’t really help to output the video for other uses, like YouTube.

But Snap has been testing out an option of exporting a 16:9 horizontal format in Version 2, thereby allowing for incorporation into traditional video editing workflow and for sharing in other applications.  The feature isn’t going to be available initially with version 2.0 of the Spectacles, but if successful in testing, we could see a firmware update that will open up for other forms of content creation.

Other improvements to version 2.0 include improving the pairing process via traditional bluetooth methods, than make it 4 times faster to download your content and share it, making the specs waterproof so that users can continue to wear and capture the action poolside or at the beach, and being able to capture still images by holding down the snap button for a few seconds to snap it. Video works the same as it did in the previous version, simply pressing the capture button and Spectacles records a 10 second clip. 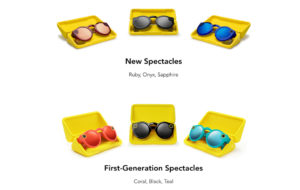 Snap has also made some aesthetic changes, with the electronics being housed in a smaller box on the left temple, there are less annoying basic colors, so users will most likely wear them, and the charging case is now small enough that it can be kept conveniently in a purse or backpack without being to cumbersome. The case will also charge the Spectacles up to four times before needing to be recharged itself.  According to Snap, overall battery life is up to 15 days with regular use. That’s surprising.

But one controversial change is that the yellow circle that drew attention to the snapchat camera, so that people know you’re wearing camera glasses, has been replaced with a more subdued color that matches the glasses overall scheme. It’s still easy to see due to the Spectacles iconic design, granted, but anyone who isn’t familiar with the device may not notice right away that a wearer is filming them, and that presents privacy concerns that also plagued Google Glass.

Cost of version 2 of the Snap Spectacles will be a little higher, at around $150, and they are shipping now. Available exclusively at Spectacles.com.

So, what do you guys think? I don’t think anyone is going to be using Spectacles to make a short film, but for that specific use to grab a first person point of view, there is promise that Spectacles could become more useful to grabbing that angle.

By James DeRuvo (doddleNEWS) With a smaller form factor that doesn’t compromise sensor size, the ARRI ALEXA LF gives us a lighter footprint, and 4.5K from edge to edge. “The larger Alexa LF sensor has […]

Filmmaker Says Broadcasters Ruin the Movies They Show on TV

By James DeRuvo (doddleNEWS) Although broadcasters spend billions on programming, you’d think that they would pay extra attention to how that programming is shown on the our home TV screens. But one filmmaker says that […]

ARRI AMIRA Gets A Boost to 2.8K Raw with Paid License

By James DeRuvo (doddleNEWS) With the latest SUP 5.3 Update, ARRI is unlocking support for 2.8K RAW in wide screen for the ARRI AMIRA Cinema Camera, users will be able to pay for an additional […]