Looks like NAB is getting going before it even starts (as usual). Sony has announced the Alpha α9 full-frame mirrorless interchangeable lens camera which can shoot Raw at nearly 20 times faster than previous models, and its full-frame sensor could image at 6K if Sony would only let it.

“This camera breaks through all barriers and limitations of today’s professional digital cameras, with an overall feature set that simply cannot be matched considering the restrictions of mechanical SLR cameras. But what excites us most about the α9 – more than its extensive product specs – is that it allows professionals to see, follow and capture the action in ways that were never before possible, unlocking an endless amount of new creative potential.” – Neal Manowitz, Vice President of Digital Imaging at Sony Electronics

With a full-frame stacked 24.2 megapixel CMOS sensor, the α9 oversamples at 6K the camera using full pixel readout without pixel binning to squeeze out every single pixel. Then the upgraded BIONZ processor converts it down to 4K for what they are calling “high quality 4K footage with exceptional detail and depth.”

By contrast, the previous model would oversample from the Super 35mm area of the sensor to produce a similar 4k image. Additionally, the α9 has improved 693 point autofocus that is able to track “complex erratic motion with higher accuracy than ever before,” according to Sony. Additionally, 1080p is available at over 120fps at up to 100MBps for slow motion at 4 to 5 times slower. Super 35mm mode is also available. 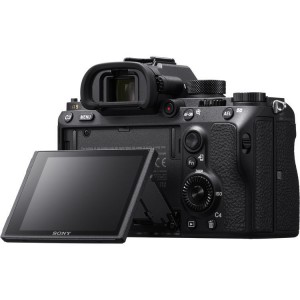 For still images, the α9 can shoot Raw 241 images  at 20 fps. That’s blazing fast and it can process them twenty times faster than the α7RII,which enjoys twice the pixel count.

Other features include ISO range up to 51,200 (expandable to 204,800), 5 axis image stabilization that has become standard on αlpha series cameras, a wired ethernet port for tethering, improved battery life to 2.2 times the previous model, and dual media card slots including one for Sony’s latest UHS-II SD media.

There is also an expandable Quad-VGA OLED touchscreen viewfinder with a resolution of 3,686K, and it stays in live view mode even during shooting, and it’s also the first full-frame model to allow for touch focus. Not only that, but Sony has taken the additional step of stabilizing the live view image as well, so that you shooters can keep track of a fast moving subject.

Though the α9 looks to have a lower pixel count than the α7R II, that doesn’t seem to be the goal here. What Sony is looking for is speed, and the α9 has that in droves. Here’s hoping that some Sony hackers like Ma1co can manage to get ahold of one and give users a 6K video option down the line