Sony has revised their mid term strategy with plans to invest more than $9 billion in the next three years on next generation image sensors. With the goal of becoming the “top brand in the overall camera market by 2021,” Sony is poised to not only do it, but to take out both Canon and Nikon in the rapidly growing mirrorless camera market. 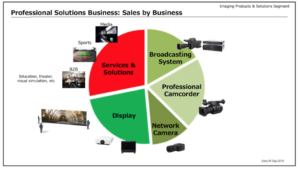 Publishing their mid-term strategy paper this week, Sony outlined overall strategic goals with the aim to lead the sensor market within three years. Those goals included: 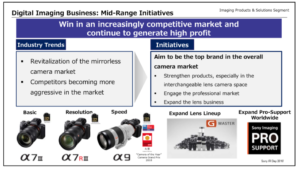 Sony also published a presentation that outlines what the positive factors have been which are driving the adjustment in their overall strategy. In 2017, operating income nearly doubled to nearly 75 Billion Yen ($700 million dollars) on 655.9 billion yen in sales. A third of it was due to recovery from earthquakes that had struck Japan, but the remainder included increased value added income as users shifted to higher priced items like the Sony A9, A7III and A7RIII.

With talk that both Nikon and Canon will be coming out with full frame mirrorless competitors later this year, Sony is not content to rest on its laurels and let the competition catch up. They’re doubling down to push the industry and stay ahead. 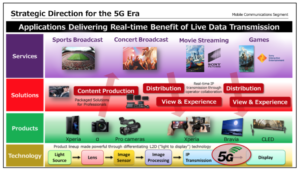 With a sizable war chest, Sony is also planning to expand both the Sony Lens lineup, and pro support for Sony Imaging. The later is positioned to focus on sports and education markets, as well as developing IP solutions for video transfer.

Sony is also looking beyond 4K in response to changes in the media industry, which is starting to move towards not only 8K, but also transmission through the 5G wireless standard.  Sony wants to focus not only on live data transmission of sports and concert broadcasts, as well as through the streaming of movies and gaming.

The real take away here is that with the 2020 Olympics coming to Tokyo, Sony is looking to make a considerable presence in the professional market which will provide an ideal showcase to show off the dividends of their investment.

Looks like the mirrorless category is about to get pretty interesting … again.

By James DeRuvo (doddleNEWS) When Panasonic introduced the VariCam LT at a special event at the Director’s Guild in Hollywood back in 2016, they promised that as time went on, firmware updates could come online […]

UPDATE (5/6/19):  Vimeo is now launching “Vimeo Essentials,” which offers paying members access to thousands of royalty free stock video footage at no extra cost. All users have to do is subscribe to the Vimeo […]

RED May Team Up With Foxconn To Make Prosumer Cinema Cameras

By James DeRuvo (doddleNEWS) The Japanese news agency Nikkei is running a story that Foxconn Technology Group, the assemblers of the iPhone and other Apple products, is seeking to branch out and enter the digital cinema […]