UPDATE: Netflix took to Twitter to respond to Steven Spielberg’s campaign to disqualify them from getting an Oscar Nomination:

We love cinema. Here are some things we also love:

-Access for people who can't always afford, or live in towns without, theaters
-Letting everyone, everywhere enjoy releases at the same time
-Giving filmmakers more ways to share art

These things are not mutually exclusive.

Looks like it’s game on towards the AMPAS meeting next month.

Annoyed that Netflix is seeking to change the playing field for theatrical distribution in theaters, movie mogul Steven Spielberg wants to tighten the rules for how a film meant for streaming can qualify for an Academy Award.

I don’t believe that films that are just given token qualifications, in a couple of theaters for less than a week, should qualify for the Academy Award nominations,” Spielberg said in 2018. “Fewer and fewer filmmakers are going to struggle to raise money, or to compete at Sundance and possibly get one of the specialty labels to release their films theatrically. And more of them are going to let the SVOD [Streaming Video On-Demand] businesses finance their films, maybe with the promise of a slight, one-week theatrical window to qualify for awards. 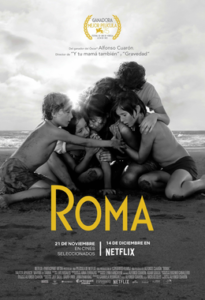 The controversy centers around Netflix Oscar nominated film ROMA, which went on to win three awards for Best Director, Best Foreign Language Film, and Best Cinematography, spent only a few weeks in a local theater in order to qualify for the nomination.  In reality, Netflix focused on offering the film on its streaming portal with the aim of disrupting the traditional distribution business model.

“In the beginning, when I started this process, I felt that [blowback],” Cuarón said. “I had friends and other filmmakers say, ‘What are you doing?’ It was almost as if I was betraying something. But I think the conversation has changed. I think most people are recognizing that this film is reaching audiences worldwide in a way that usually only mainstream films do.”

The question is, should we view such a film as a theatrical release, or a TV movie? From Spielberg’s point of view, if you’re getting your funding from a TV broadcaster or streamer, then your film is actually a TV movie. But many, including Spielberg, think that Netflix wants to have it both ways. And some believe that it could have cost ROMA the Best Picture award in the process.

Cuaron hits back by pointing out that movie theaters usually focus on playing big budget Hollywood movies because they fill theater seats. That’s making it harder for the smaller art-house films, and foreign language films from getting seen in theaters. “I’m a filmmaker. I believe in the theatrical experience. But there has to be diversity,” Cuaron said. “The multiplex theatrical experience is a very gentrified experience. It’s hard to see art-house films. It’s hard to see foreign films. Most theaters play big Hollywood movies.”

On the other hand, with ROMA, Spielberg believes that the company only paid lip service to the spirit of the Academy Rules in order to qualify, and that will set a dangerous precedent. To that end, the Ready Player One director is lobbying the Academy to make a rule change to make it more difficult for a film that is primarily streaming to qualify for Oscar by merely showcasing in a single theater for a few days. “Steven feels strongly about the difference between the streaming and theatrical situation,” said an Amblin spokesperson. “He’ll be happy if the others will join [his campaign] when that comes up [at the Academy Board of Governors meeting]. He will see what happens.”

At stake is the very survival of movie theaters. It’s no secret that in spite of record ticket sales, that fewer people are going to the movies these days, because ticket prices and concessions are too high and the technology for the home theater experience is beginning to rival theatrical distribution. I mean, why bother to pay $20 to see a movie, drop another $20 for salty popcorn and a coke, when you can sit in your own couch and watch the film on a big, 70” 4K TV?

By Kevin P. McAuliffe (doddleNEWS) (With Danny Santos on assignment, Kevin McAuliffe joins us to give his take on what’s coming in film/tv news! Thanks Kevin, for pinch hitting!) The theme for this week’s DIGEST […]