DISH Network’s Sling TV streaming service is adding a feature that is aimed squarely at cord cutters who are using PlayStation Vue. Dubbed “Sling Cloud DVR,” the service will allow users to record live TV on the internet and store it indefinitely.

Sony’s Vue streaming service has a similar DVR feature, but only allows users to store their recorded programs for a maximum of 28 days before they are automatically deleted. By contrast, Sling’s Cloud DVR feature promises any DVR recordings made by their users will not expire after 28 days unless users run up against their storage limit, and then the oldest recordings will naturally roll off to make room for newer ones.

Other features include standard pause, rewind, and fast-forward options through recorded content, as well as conflict-free recording so that users won’t miss a program because it’s airing at the same time as another favorite on another channel. Sling’s Cloud DVR will also enable users to record movies, TV shows or select a series record option of their favorite programs.

Sling will be Beta testing the Cloud DVR service exclusively to Roku users through a special invitation only offer. Those who opt into the Beta test will receive a special 100 hour package at no extra charge for the duration of the program. During the Beta test, Sling says they will listen to user feedback with the intent of adding more features to add value to the product. Afterwards, it’s likely that Cloud DVR will be charged based on storage, with users charged for additional hours based on their storage needs.

“We’re extending our entertainment portfolio for those who value premium content but also want more TV freedom suited for their lifestyle, whether watching at home or on their mobile devices. This is TV your way.” – John Stankey, CEO, AT&T Entertainment Group

In related news, AT&T / DIRECTV is rolling out not one, but three different streaming services for customers, beginning November 30th. In addition to DIRECTV Now, Fullscreen is a premium subscription video on demand service with access to over 1500 hours of original programming, while Freeview looks to be a streaming version of their free Audience channel on DIRECTV.

Dubbed “rules free TV ,” the gaggle of new streaming options for the more than 20 million households who have cancelled their cable and satellite subscriptions in favor of streaming media directly over the Internet. “We’re now delivering video over a technology platform that will have multiple product capabilities,” the press release said. “Our new customer-centric offers show that mobility and entertainment are better together.”

AT&T also promises that getting started is as easy as signing up at their website, without additional equipment, annual contracts or credit checks required. Additionally, DIRECTV is promising that any content streamed over their service will not count against any data caps for mobile devices or other AT&T services. 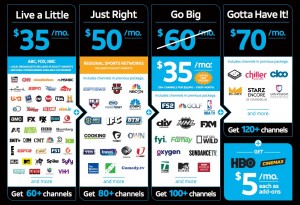 The packages for DirecTV Now start at $35 for 60+ channels, and go all the way up to “Gotta have it” package which offers 120+ channels of live streaming content for $70 a month. Premium channels like HBO and Cinemax can be added for $5 a month each.

The service is available now through Amazon Fire, Chromecast, Android and iOS devices, as well as Vizio Smartcast and all web browsers, with plans to bring Roku devices and other Smart TVs online in 2017. Users can get a free Apple TV or an Amazon Fire device with a three month paid subscription.

To be notified when the service goes online, click here.