If you’ve been around here for awhile, you know that one of my favorite phrases is from Ansel Adams, who is famous for saying “The best camera is the one you have with you.” That means for most of us, a smartphone. And there’s no denying that mobile filmmaking continues to get better and better. But if you want to take the next, albeit, small step to get a better image, then here are 10 cameras for under $300 to take you to the next level.

This list comes from DSLR Video Shooter Caleb Pike, who has compiled an impressive list.  Caleb had three realistic criteria when choosing this list, and that included that all the cameras needed to shoot in a cinematic 24p at 1080p, were $300 or less, and that price was consistent, meaning not a special clearance deal. Now, to be fair, most of these cameras are used, but are still available at places like eBay, Craigslist, and my new favorite, the Facebook Marketplace.

SONY NEX-5N. The NEX 5N is pretty bare bones, with a 16.1 MP APS-C sensor, but has the benefit of being able to shoot full HD video at up to 60p. There’s a flip-up screen, for vlogging, sort of, since you can only see part of it, and a few advanced features such as focus peaking. Pike also says that you’re not going to want to do any long interviews with it, as it does tend to overheat. Keep filming pithy. You can get it used for around $100.

SONY NEX-6. Caleb adds that if you’re going the NEX route, maybe spending a few extra bucks and pick up the NEX-6 instead. Pike says it has basically the same specs as the newer NEX-5N, but has better heat management. 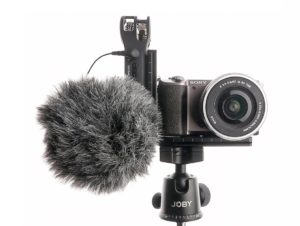 SONY A5000. The next step up is the Sony a5000 with a larger, 20.1 MP image sensor. Sony also redesigned the flip up screen so you can see the entire thing, making it ideal for vlogging. I bought one last year for that purpose, and not only is is pretty good, but I like the WiFi support feature, which enables you to post with your cellphone when you’re done.

Downside is, I had to get an e-Mount lens. I’d love to be able to just use my Canon EF -S lenses from my old Canon T3i. Maybe an adapter is out there.  Also, there’s no external mic, meaning you have to record a separate track and marry them in post. but over at TubeNoob, he has a very clever way to record audio using a Zoom H1 mounted to your camera cage.  Cost, around $200

SONY A5100. The A5100 is an updated version of the previous model, with improved image processing and a bump up to the Sony XVAC S codec. It also shoots up to 50fps, and has advanced features like zebra stripes and focus peaking. Sadly, still no external microphone support. But you’ll still have to sync in post. Price is around $300.

CANON EOS M. Moving to Canon, the first mirrorless camera from Lake Success has an 18 MP APS-C sensor, shoots 1080p at 24p and 30p, with a bit rate of up to 50 Mbps. And while vloggers won’t get as much out of it without a flip out screen, it does offer HDMI out, so you can add an external monitor. There’s also an external microphone jack.

Moreover, thanks to the rocket scientists at Magic Lantern, shooters can breach 2.5K 12-bit Raw video, and some have even boasted on the forums of getting up to 5K at 24p with an anamorphic 2.35:1 aspect ratio!  WOW.  There’s a 5x digital zoom mode, and offers audio levels (which helps without a headphone jack). It does require using the MLVApp, though, to process it into a workable video clip. For $150, it would be fun to play with.

CANON T2i. Making your first foray into DSLR shooting, Caleb recommends picking up a used Canon T2i. Benefit here is the flip out screen, it’s lightweight, and can shoot 1080p at 30fps. For around $150 used, it’s a great way to get your feet wet into DSLRs. But you’ll likely outgrow it pretty quickly.

PANASONIC GH2. Those who use the micro four thirds Panasonic GH2 are a pretty devoted bunch because for an entry level mirrorless model, shooters can get up to 120Mbps from its 16MP sensor. It also has a flip out screen, external microphone jack, and headphone jack. It’s as if it was designed for the low budget filmmaker and blogger. And at around $350, it’s a great way in.

PANASONIC GX7. The Panasonic GX7 is pretty bare bones, for considering the price, but it does record 1080p video at 24p, 30p and 60p. Sadly, there’s no microphone jack or no HDMI out, the the LCD is one of those partial flip outs that only lets you lift the camera above your head and still see what you’re shooting. But in a strange design feature, it has tilt-up EVF which will really help when shooting low angles. Price is under $200 used, but Caleb has seen it as high as $300.

Caleb also has on his list the SAMSUNG NX2000 and NX1000. I’m not much of a fan of either of these, simply because Samsung is out of the game now, so it’s a dead end developmentally.  It’s much better to get used to a system that has a next step. However, for under $200, they will shoot 1080 at a decently cinematic 24fps.

Lastly, on his list is the Pentax Q7/Q-S1, which has as it’s only tempting feature that it takes 8mm camera lenses with a c-mount. So if you want to get a retro, Super8mm aspect ratio with the look to go along with it, but the 5.6x crop makes it not useful for much else. Still, it could be a fun one to experiment with.

Then again, there are Super8 apps on your iPhone that would be way easier.

By James DeRuvo (doddleNEWS) There’s a comfort in knowing that even when we don’t hear from the rocket scientists at Magic Lantern for awhile, they are always tinkering with Canon’s Firmware, mining secrets that even […]

The busy bees who are doing the Lord’s work with Magic Lantern have breached another milestone, by achieving 5K  Raw at 24fps on a Canon EOS-M Mirrorless camera. It’s not without some caveats though. It’s […]