Live streaming of events is all the rage, thanks to Facebook Live, YouTube, Periscope, and a host of others, which are airing events like product announcements, concerts, and more. But there’s also an emerging market that’s doing live streaming with virtual reality, and Teradek has a device that can stream a live 360° experience. And it just got an upgrade.

It’s called the Teradek Sphere Stitch, and it stitches together the incoming signal from up eight HD cameras in 1080p with a second Sphere daisy-chained to it. So each unit, which are run on an iOS device, can handle up to four GoPro cameras each, like perhaps a mounted in the Omni device. The iOS app can also do chromakey, basic white balance, tint and color profile correction in real time. The stream offers three different output options including: 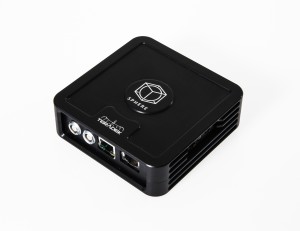 In addition, the app will do multiple lens correction by allowing the VR technician to do an image rotation and edge alignment in order to tweak the stitch to make it even more accurate, and then blend them together to make them less noticeable. The image is then output for streaming or saved as a stitched panoramic video in an MP4 format in 1080p.

The interesting thing is that the iPads are capable of doing this live stitching with only an estimated 4 frames of latency. Sphere doesn’t have to rely solely on GoPros, either. Teradek has also managed to use REDs, connected via HDMI, which can then live stream to the iPad app and stream out live.  Sphere’s interface is about the size of an Apple TV, and has HDMI or HD-SDI inputs, a WiFi connection to your iPad. The lower cost HDMI version is $3,000, plus $1,000 for the live streaming interface, or you can go with the HD-SDI version for $4,000, plus $1,000 for live streaming.

This really does take the live stream to the next level and it’s amazing to see just how far it’s come since we first started seeing it with GoPro’s HeroCast and Periscope options just a year ago. Now we’re able to stream live in HD from up to 8 cameras with nearly no latency? That’s mighty impressive. But live stream has always been Teradek’s bread and butter, and now that it’s pushing it out to the internet, you can bet that whatever secret sauce they’re using, it’s going to do the job.