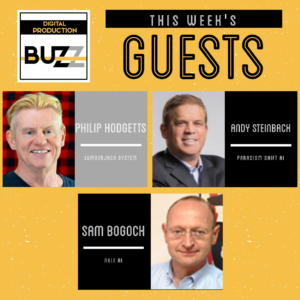 This week on the Buzz podcast, we look at Artificial Intelligence (AI). AI seemed to burst on the scene a couple of years ago, and has been steadily being applied to almost every sector of our business in one form or another.

In this episode, host Larry Jordan talks with industry thought leaders Philip Hodgetts (Lumberjack Systems), Andy Steinbach (Paradigm Shift AI), and Sam Bogoch (Axle AI) about what AI is, where it’s used and how it impacts the media work we do. Plus, James DeRuvo with the Weekly DoddleNEWS Update!

By Larry Jordan Last time on The Buzz, we took a look at renting gear.  With equipment evolving so quickly and new stuff coming out all the time, sometimes it’s better NOT to invest but to […]