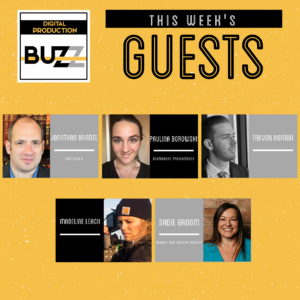 In this episode of the Buzz Podcast, we look at the challenges facing young people just entering the media industry. What first got them interested in media and what excites them about their careers? Plus we learn about a new mentoring program for women and an update on industry labor news.

by Larry Jordan On this episode of The Buzz we look inside eSports. This growing phenomena on college campuses appeals to highly competitive non-athletes. To start, we talk with members of the USC eSports Club […]

by Larry Jordan This week on the Buzz, we have a variety of subjects to share with you. We start with an update on the tectonic forces between writers and agents that’s creating upheaval in […]

The Buzz Podcast – Our Creative Community

by Larry Jordan User groups were at the heart of the personal computer revolution – but where are they now? What makes a user group successful? What are the challenges in running such a group? […]