We cover a wide range of subjects on this week’s episode of The Buzz. The Writers Guild is upending the entire media industry, DaVinci Resolve provides state-of-the-art collaboration tools for editors and colorists, speeds of wireless networks are getting fast enough to replace a wired connection and an inside look at the insane world of stunts. 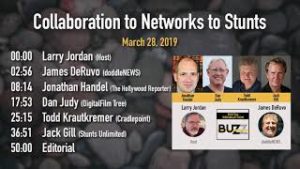