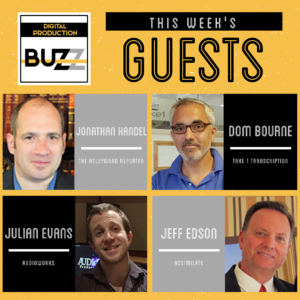 This week on the Buzz, we have a variety of subjects to share with you. We start with an update on the tectonic forces between writers and agents that’s creating upheaval in Hollywood. Then, we look at the world of text transcripts and how AI is transforming an industry. Along the way, we’ll also cover sound design and and better DIT workflows.

Larry Jordan: Is it finally time to Upgrade to MacOS High Sierra for editing?

by Larry Jordan (doddleNEWS) When High Sierra was first released by Apple, there were enough bugs in it for professional editors to hold off upgrading. Now, we are on version 10.13.2 and the question of […]

by Larry Jordan [Reprinted from LarryJordan.com] Video editing is part craft, part technology and part logistics; with a lot of client management as well. So, here are some basic ideas to keep in mind as […]

by Larry Jordan Color Match is new in the April, 2018, update to Adobe Premiere Pro CC. What it does is allow you to compare two shots side by side, then automatically select color and […]