If you sat through the two hour keynote presentation of the 2019 Apple Worldwide Developer’s Conference, you may have noticed a huge redesign of Apple’s promised, and two years overdue, Mac Pro. Fondly named the “Modular Mac” by Apple VP Phil Schiller, the redesigned Mac Pro promised to address many of the shortcomings that the Trashcan Mac Pro experienced so badly, that Apple apologized for it.  And after more than two years of pros waiting for Apple’s Professional Design Division to deliver the Modular Mac, Apple announced that the Cheesegrater is back.

If you recall the Modular Mac announcement back in 2017, Apple VP Phil Schiller invited journalists from the New York Times and other publications to Cupertino to talk about the misadventure that was the redesigned “trashcan Mac” and gave them a preview of a redesigned Mac Pro, that basically looked like Apple was doubling down on the central core cooling technology (which made the computer sound like a jet engine) but with the option of being modular. Schiller said the Modular Mac would be coming by no later than 2018.

But then that deadline came and  went, and now we know why. That’s because the professional market doesn’t care about innovative design if it compromises performance, and the central core Mac, which Apple was selling up until this WWDC, was actually slower than the iMac Pro. Many pros experienced so much trouble with the Mac Pro, that it quickly became known as the TrashCan. Many others, like Jarred Land, resurrected their old Cheesegrater Macs, boosted the hardware, and thanks to drivers by Nvidia, had a capable editing computer for the short term. Others, just went to Windows and Adobe Premiere.

So that misadventure is now over, and Apple has introduced what is clearly the once and future king of towers … the 2019 Mac Pro (aka Cheesegrater 2.0).  Specs are stunning, with a 28 core Xenon Processor, AMD Radeon Pro Vega II or Radeon Pro 580X GPU (actually, there’s room for eight of them, including four PCIe double GPUs), up to an insane 1.5TB of DIMM RAM, a 1.4 kilowatt power supply (which you’d definitely need with eight GPUs driving it), a newly designed Afterburner accelerator card for processing ProRes Raw in 8K, up to four TB of SSD storage, as well as the usual Thunderbolt 3 and USB-A connectors, 2 10GB Ethernet ports, and more.

The Cheesegrater chassis is also removable, sliding up to reveal a 360 degree access to the entire computer interior. 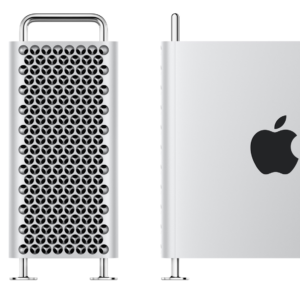 But the real killer is the 3 dimensional cheese grater case, which is created to promote cooling airflow around the computer. Apple says that the design can push twice as much air as the Trashcan, and can run unrestrained all the time. So no thermal throttling. That’s not only due to the lattice air holes that are in the front and back, that act as a huge heat sync. There’s also three large, but incredibly silent, fans.

The MacPro is so powerful, that it can drive up to three independent 8K streams with no latency, or six 4K streams. So for live broadcasting, this Mac Pro promises to be a BEAST.  And for editing in 8K, well, that’s really what this computer is built for, let’s be honest.

And with all that performance, it has to have a worthy display, and that’s where the new, radically redesigned 32″ 6K retina screen comes into play. Designed with the cheese grater lattice heat sync, the 6K Pro XDR display monitor offers eXtreme Dynamic Range at 6016×3034 resolution from 20 million pixels, with a 1,000-1 contrast ratio,  1000 nits brightness (1600 nits peak), which Apple says can run at full stream “indefinitely.”  There’s also a super wide view angle, and Apple has put anti-reflective coating on the monitor to prevent glare. The Pro XDR screen can also rotate into portrait mode, but here’s where the devil is in the details. 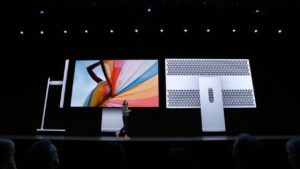 Yes, it’s gorgeous. Yes, it will cost 1/6 the price of a comparable reference monitor by Sony, but you also have to pay an additional $1,000 for the stand, and another $200 for the VESA rotation attachment.  The Pro Stand is a jewel or engineering, with a swing arm that can maintain the monitor’s position no matter how you adjust its height, making the monitor feel virtually weightless. It’s very well made in a  way that only Apple can offer. But it’s still $1,000 for something that only holds the monitor up.

And when the price of the stand was announced, you could hear an audible gasp from the developers in attendance. It’s as if they all said to themselves … What the hell, Apple?!  Available in the Fall, the new Cheesegrater 2.0 MacPro will be $5995 for the basic 8 core model, but when you add the $4995 for the 6K retina screen, $995 for the pro stand and $199 for the VESA adapter, $13,000 for a BASE unit. Meaning you’ll easily spend $25-30K maxing out the specs for editing in 8K. Or maybe even more.

Is it worth it? I’m sure there will be a lot of users who will crave that kind of performance, but for you’re average Indy? I don’t think Apple is going to lure them away from their Hackintoshes or iMac Pros any time soon. But kudos to Apple for listening to the professional market and going back to a design that not only promises performance, but also upgradability.

by Larry Jordan After the next major macOS upgrade, some older media formats may not play on your Mac computer. Developers have been working on this for several years, but, now, producers and editors need […]

Due to the evolving needs of higher end post production workflows like 8K and virtual reality, there’s a practical arms race going on to provide processors and graphics cards that can work in tandem to […]

After five years of development in partnership with Fujifilm, Panasonic has unveiled their new 8K organic camera sensor, originally announced last February. And it’s inside the new AK-SHB810 camera. The modular AK-SHB810 is designed to […]