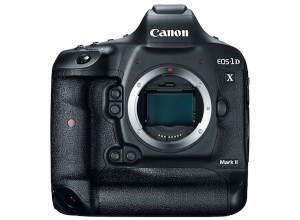 All good things must either come to an end — or get upgraded. In the case of Canon’s flagship DSLR, the EOS-1D X, it has definitely gone with the latter. Today the company officially unveiled the successor to that camera with the EOS-1D X MK II, and it packs a punch with upgrades from the previous version.

The body of the camera remains very similar to its predecessor which should allow professionals to upgrade to the 1D X MK II and run. The full-frame CMOS sensor has been upgraded from 18 megapixels to 20.2 megapixels. It also sports Dual DIGIC 6+ processors, and a top ISO setting of 409,600 (!!), but remains at a 51,200 native ISO. Canon has also revamped the 61-point autofocus system with every AF dot supporting an f/8 max aperture.

The new camera is also capable of a 14 frames per second continuous shooting mode or a blisteringly fast 16 fps with mirror lock-up. To give you a sense of how fast these modes are, e PHOTOzine demoed it in their hands-on video. Here’s the 14 fps rate:

The ability to shoot at 4K does come at a price, however, as it still encodes using the ancient MJPEG codec. This will limit you to shooting short 4K clips no matter how much room you have on your flash card. Canon could have used the the EOS C300 MK II Cinema Camera’s XF-AVC codec but almost certainly didn’t because they don’t want to eat too much into their professional video camera market. The 1D X Mark II is definitely a still camera first and a video camera second.

We may still see Magic Lantern work something out, however, so you may still be able to record video RAW to the 1D X MK II in the future. That’s not a guarantee, but I bet someone is looking into it already.

Here’s a walkthrough from B&H: