Being an admitted victim of gear acquisition syndrome (G.A.S.), I am always on the look out for new gear that can make shooting as a one man crew a lot easier. After all, it’s my job right? Yeah, that’s the ticket. Well, lately I’ve been on an anti-GAS kick, but the SquidRig tripod mount may just change all that. 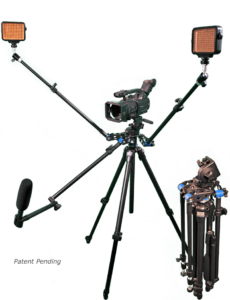 It’s pretty clever, and I don’t know why nobody thought of it sooner. It essentially looks like the inventor took a pair of monopods, and a very long magic arm, and attached it to a tripod using a master mounting plate (called the Tripod base adapter). And I’m OK with that, because the refined idea is brilliant. Think of it as a Joby Gorilla Pod Mobile Rig all grown up.

Here’s how it breaks down. SquidRig has two adjustable light poles that extend out to up to 3 feet, and can be moved either vertically or horizontally to get them into the right position. The extendable light poles have a 5/8″ stud with a 1/4-20 thread, with a ball mount that allows to adjusting the proper angle or your lights (or other accessory), as well. 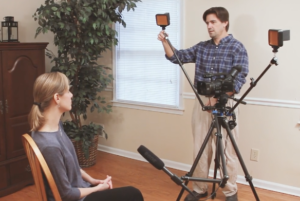 The third arm is a posable magic arm that can extend up to 4 feet, and has a rubber microphone holder at the end. This is ideal for attaching a shotgun mic, which can then be positioned just out of frame in order to get the perfect audio from your subject.

There’s even a convenient little hook built into the tripod base adapter plate to use as a place to put your headphones when not needing them. All three arms can be then collapsed into a simple, compact configuration, which can then be placed in a really nice zippered bag.

And the best part is, you can bring your own tripod to the party, so you don’t have to buy yet another one. The three recommended TriPods include the Manfrotto 290, the Manfrotto 502AH, and the Benro SLIM Video Tripod. The SquidRig will, however, work with most flat-base tripods with a 3/8″-16 thread. You just add SquidRig to your 1/4-20 before screwing on your fluid head.

Documentarians and ENG cameramen will love this thing because they don’t have to bring multiple stands to set up lights or mics for interviews, especially when they are done on the fly. It also means you can carry smaller lights that can be just as powerful.

Moreover, with setup done in less than two minutes, wedding and corporate shooters will like it too. All in all, a great all in one solution for a one man crew looking to downsize their gear footprint, without losing any capability or performance.

The SquidRig basic comes with a tripod base adapter,  main plate with rotating brackets, rear headphone hook and three extendable arms. Price is $189. There is also a complete package which comes with a set of Manfrotto 290 sticks and fluid head, for $389.

For more information, check out https://www.squidrig.com/.

By James DeRuvo (doddleNEWS) If you’re an independent filmmaker, chances are you have at least one JOBY Gorillapod in your camera bag. And why not, they allow you to stick a camera just about anywhere […]

It’s been awhile since we offered up a thrilling chapter in “Kickstarter Campaigns we love,” and this time around, I came across a cool alternative to a monopod that could be the best way to […]

The chief difference between a garden variety tripod and a video tripod is pretty substantial. First, the legs tend to be beefier, with more sturdy leg locks, and there’s also that iconic high hat fluid […]