If you have an iPad lying around, and you need an excuse to use it for something other than updating Facebook, why not turn it into an editing tool for cutting your next feature? Check out this cool list of apps that can do just that.

Ctrl+Console – You may not remember this handy editing interface, but it turns your iPad into a pretty impressive and customizable multi touch editing controller. The brainchild of Jeff Chow, it was initially envisioned to be part of a Kickstarter campaign in the early days of crowdfunding because anyone really knew the tips and secrets of conducting a successful campaign. Sadly, Chow didn’t succeed in his first foray, but he returned for a second round and was able to raise over $41,000, plus another quarter million or so in venture capital to bring Ctrl+Console to life. And I’ve used it and its really slick. It can control 11 different interfaces and can run between shuttling, adding edits, in and out points and supports gesture based control. Users can also customize it depending on the NLE they’re most comfortable in. Check it out now on iTunes.

Chow is also working on a new app called the Lightroom sorter, which will enable users to organize and manage their still photographs in Adobe Lightroom like never before.

Next on the list is EditMote [iTunes link] and Cut Notes [iTunes Link]. EditMote is a remote control app which allows users to create bespoke layouts to access features on most post production suites like Adobe Premiere Pro or After Effects. It comes with a keypad with a basic button array that allows users to mark a button and control that particular function in a very basic fashion. Works in concert with EditMote Preference for the Mac. $4.99. CutNotes allows users to make notes and import them into Avid Media Composer or Final Cut Pro, as well as share them via email, dropbox, or Kollaborate [iTunes Link 1 and Link 2]. $14.99.

ProCutX [iTunes Link], is a Final Cut Pro X controller app, which works kinda like how Ctr+Console does, but with a slightly different layout design. Released in 2013 for around $40, ProCutX is currently free, pending an updated new version, so get it while it’s hot. 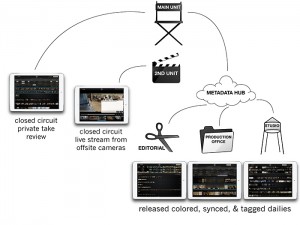 Live Play 3 – To Dailies. From Light Iron Digital, Live Play 3 and To Dailies works as a digital screening room for rough cuts of the days shot footage in H.264. Users can then log them with metadata tags, and then important that information into your NLE. And it’s under $20, plus the cost of cloud services, which at $250/week is where they get you.

Custom KeyPad – This app is a jack of all trades for creating your own keypad designs for use in your NLE editing suite. Fully customizable, Custom Keypad provides an interface with trackpad, joystick and directional toggles, as well as standard buttons. Additional functions include:

Cost is $4.99 plus in app purchase options for various features at .99 a piece. Not too bad.