Final Cut Pro X allows you to animate elements by changing their position on screen during playback. But, what if you want to move an element within the frame AND make it travel on a curve? This tutorial shows you how.

NOTE: This technique works for any video clip or Photoshop still image. I’m using a Generator because they are trickier to scale and position than any other clip.

FIRST, YOU NEED SOMETHING TO MOVE

FCP X has a series of Generators > Elements that you can add to a project; such as a circle, square, arrow, heart and so on. They can have a variety of colors, edges and/or drop shadows.

But! You need to be careful in scaling and positioning them, otherwise the element disappears as you move it toward the edge of the frame.

Here, for instance, I added Generators > Elements > Shapes to the Timeline. I then:

Then, and most importantly, I do NOT move it using either the white circle in the Viewer or the Center settings at the bottom of the Published Parameters window. Once this shape is scaled, moving it in the Generators Inspector will cause the element to disappear before it reaches the edge of the frame. 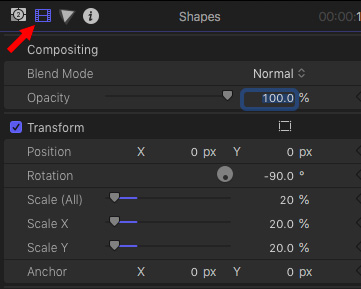 Instead, in Inspector > Video, change Transform > Scale so the arrow is the size you need. Rotate it to point in the direction you need by modifying Rotation. Then, adjust its starting position by modifying Position. This moves the element, not the frame it contains.

Here’s the result so far.

Here are the steps to create keyframes to animate the motion of an object. Your numbers will be different, depending upon where you want to position the object.

NOTE: Keyframes are not scary. They are simply locations in a clip where a setting changes. We always work with keyframes in pairs – a starting keyframe and an ending keyframe. A single keyframe can contain multiple parameter settings; for example, position, scale and rotation.

NOTE: You can also change as many other parameters as you want. I often mess with scale and rotation in these moves, however, in this tutorial, I am focusing exclusively on movement.

Once you have at least two keyframes set, click the gray box to the right of Transform. The box turns blue and the “motion path” for that object is displayed in the Viewer.

NOTE: Remember, never touch the white circle above the object. That just messes things up.

Here’s what our path looks like so far. The slight curves are caused by FCP X automatically enabling Ease In / Ease Out (acceleration / deceleration) at each keyframe.

To convert a keyframe between a straight-line and a curve, control-click (right-click) it …

Read the rest at LarryJordan.com.

By Larry Jordan Vincent Zorzi, one of the founders of Arctic Whiteness and developers of Final Cut Library Manager, sent me an email last week: “Good news: based on user feedback, we’ve added some important features […]

By Larry Jordan This week on the Digital Production Buzz podcast, we took a look at sound design and production planning.We started by chatting with three Academy-nominated audio mixers, including Julian Slater (Jumanji), and Christian Cooke […]