With the announcement of the official name, they’ve release a new motion logo which was designed by Weta Digital along with a musical theme written by Danny Elfman. The logo will play before each film set in the Dark Universe and you can watch a video of it here: 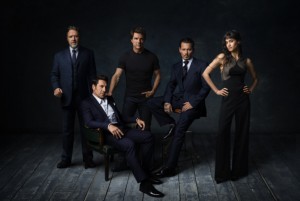 Universal has also released an image of the cast that will make up Dark Universe, featuring Tom Cruise, Sophia Boutella (The Mummy), Russell Crowe (Dr. Jekyll/Mr. Hyde), Johnny Depp (The Invisible Man), and Javier Bardem (Frankenstein’s Monster). From the look of the Dark Universe logo, I suspect we’ll get the usual Universal Pictures motion logo that will then seamlessly continue into this. Universal Pictures chairman Donna Langley said the following in a statement about the cinematic universe:

We take enormous pride in the creativity and passion that has inspired the reimagining of Universal’s iconic monsters and promise audiences we will expand this series strategically. The enterprise masterfully developed by Chris (Morgan) and Alex (Kurtzman) will allow each subsequent chapter the right time to find the perfect cast, filmmakers and vision to fulfill it.  As we launch Dark Universe with Danny’s provocative theme before The Mummy and collaborate with a brilliant filmmaker like Bill to weave the story of a very modern woman in a very classic tale, we feel confident we’re off to a tremendous start.

I’ve been pretty happy with what they’ve been doing with The Mummy so far. I expected them to tone down the horror elements, so that doesn’t come as too much of a surprise, but unlike the DC Extended Universe, Kurtzman and Morgan have been very clear they’re taking the whole process a step at a time and slowly building it up.

We also finally get confirmation on the next Dark Universe film. It will be Bride of Frankenstein, which is set to premiere on February 14, 2019. The film will be helmed by Beauty and the Beast director Bill Condon who said the following in a statement:

I’m very excited to bring a new Bride of Frankenstein to life on screen, particularly since James Whale’s original creation is still so potent. The Bride of Frankenstein remains the most iconic female monster in film history, and that’s a testament to Whale’s masterpiece-which endures as one of the greatest movies ever made.

As far as skipping the origin story of Frankenstein, I think it is a great call. We don’t need to see that, and I’m far more interested in seeing what they do with The Monster in these films. In the books, Frankenstein’s Monster becomes very intelligent, so I hope they add that into the upcoming film.