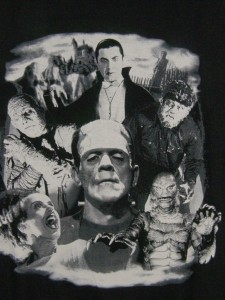 From day one, I had an uneasy feeling about Universal’s plan to create a unified monster film universe, being overseen by Star Trek’s Alex Kurtzman, along the lines of Marvel Studios’ cinematic universe. Despite success with The Mummy franchise (now being rebooted), the studio failed with Van Helsing (2004) and The Wolfman (2010).

Recently, The Hollywood Reporter held an executive roundtable discussion featuring studio heads, including Universal Pictures chairman Donna Langley. She spoke about Universal not having access to a superhero library (except Namor: The Submariner), but being able to conjure something similar by using the classic Universal monster library in the same way. Here’s what she said to THR:

We don’t have any capes [in our film library]. But what we do have is an incredible legacy and history with the monster characters. We’ve tried over the years to make monster movies — unsuccessfully, actually. And we had an epihany, which is that the horror genre has a ceiling; it’s not global. There’s a reason why monster characters are enduring, generation upon generation. So we took a good, hard look at it, and we settled upon an idea, which is to take it out of the horror genre, put it more in the action-adventure genre and make it present day, bringing these incredibly rich and complex characters into present day and reimagine them and reintroduce them to a contemporary audience.

Now, I understand Universal’s need to break into the superhero genre, and I know that monster movies are hard to get right, but I was hoping they were planning on doing something far more interesting with their properties than to shoehorn them into a superhero mold. It feels like they’re defanging (pun!) monsters for the almighty box office hit that is rated in the PG-13 area.

On the other hand, I did love Stephen Sommers’ The Mummy (1999), which was very much an action adventure film, that was done well, so it isn’t without precedence. There’s also some very interesting things you can do with monster films as superheroes that you can’t do with actual superheroes. They can change from good guys to bad guys, and you’ll buy that.

With the upcoming Captain America: Civil War, Tony Stark is set to be the antagonist, but no one will think he’s the bad guy in the same way Loki or Red Skull were. At best, he makes a good point that opposes Steve Rogers, and at worse, he’s misguided. Dracula can save a little girl from being hit by a car, and then eats her parents right after and no one will bat an eye.

Other than the source material, there’s no path that these characters need to follow — everyone expected Marvel’s Civil War and Infinity War would show up at some point down the road, but the Universal Monsters Cinematic Universe (coining it the UMCU, you read it here first!) has free reign to do whatever they want.

I really did hope Universal was going to do something more interesting than this, but there are benefits I can see. Dracula Untold and I, Frankenstein doesn’t fill me with much confidence but the latter isn’t part of the UMCU, while the former was shoehorned into it at the eleventh hour.

What do you think? Is this the way that Universal should go, or should the monsters remain just that — monsters? Let us know in the comments below!