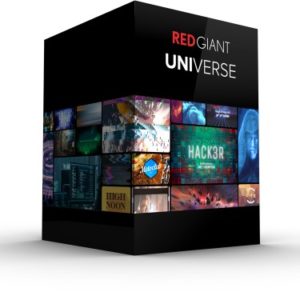 Refining their dashboard from the ground up, Red Giant Software has launched version 3.o of Red Giant Universe, their visual effects plugin and preset interface for Adobe Premiere Pro CC and After Effects CC. Moreover, Red Giant has added give new, customize text effects to create a unique look to your titles.

With this update, users can enjoy an enhanced user experience thanks to the brand new Universe Dashboard, a dockable control board for Adobe Premiere Pro® and Adobe After Effects® that makes it simple to add effects and presets. – Red Giant Universe 3.0 press release

The new, dockable Universe dashboard offers easier access to over 75 Red Giant Universe’s visual effects plugins and presets, making it easier to streamline your visual effects workflow by saving time hunting for the tool you need.  Additionally, users can now save their favorite effects and transitions as a “favorite” in order to access them with a simple touch of a button.

Moreover, a modified version of the RGU dashboard can be available for other applications outside of Adobe Creative Cloud applications, including Apple Final Cut Pro X and Motion, DaVinci Resolve, Avid Media Composer, and my new favorite, HitFilm Pro.

New Titles and text effects. Red Giant has also beefed up their titling and text effects tools with give new text generation effects, that bring more of the classic 80s and 90s vibe that RGU has popularized in the last few versions.If you love movies from War Games to The Matrix, and have always wanted to create those cool computerized text effects, or even if you want a simple text transition to establish a change of scene in your thriller, these tools are for you.

Red Giant has also made every preset and effects tool savable to the Dashboard under the Preset browser, so they can be accessed quickly and easily.
Pricing for Red Giant Universe 3.0 is as follows:

Subscribe through tool Farm for the best deal ($10 off).

Tonight on the Buzz Podcast … Plugins for Post Production

by James DeRuvo (doddleNEWS) Tonight on the Buzz, join Larry Jordan as he takes a look at the plugins we use in our post production workflow. Larry’s Guests include: Boris Yamnitsky (@BorisFX), Aharon Rabinowitz (@RedGiantNews), […]

By Kevin P McAuliffe With all the different effects packages out on the market, you always have your “go to” effects.  One of my “go to” effects that I use all the time is Trapcodes […]