I love to search eBay, Facebook Marketplace and even Craigslist for vintage prime lenses.  There’s some gold in them thar digital hills, if you know where to look. And if you’re crazy lens expert and videographer Mathieu Stern, chances are, that prime lens is Russian. But don’t let that fool you. The Russians have made some of the greatest lenses in the world. Only most of them were used to spy on us.

This crazy lens was used by Russian Spies. The Helios Cyclop h3t-1 is a 85mm f1.5 lens attached to a night vision device used by the russian army and even the KGB. “The one eyed monster” as some people call it was the perfect weapon for spies and people wanting to know your dirty secrets. – Mathieu Stern, Blog

Famous for putting a 100 year old portrait bellows lens on a RED Epic, and of course, building the “Crapinon” lens out of spare parts, Mathieu Stern knows a great find when he sees it, and he lives to breath new live in camera gear, especially when it means he can get stunning images like this:

My goodness! Look at that bokeh! That’s what an 85mm f1.5 prime lens buys you. And it’s a gem that you can find pretty often on eBay, as Russian lens companies are selling these vintage pieces of glass on the open market. What’s interesting about this one is that the Helios Cyclop h3t-1 is part of piece of spy equipment that was used as a night vision monocle for watching Americans in the dark. It comes with an infrared pointer so that the spy can hone in on their target without being noticed.

Listen to Stern showcase it here: 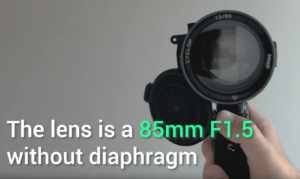 How did it get so fast? Well, thanks to having no diaphragm, the Helios Cylops h3t-1 can see in absolute darkness when using that infrared illuminator. It’s f1.5 aperture speed just screams. And the best part is, it was only $40. WOW!

Course, now that Stern has announced this to the world, this little gem is going to go for twice that much, if not more. But even at $80, it’s a steal.  One thing though, as with most Russian imports, this lens is micro four thirds, so you’ll either need an adapter to put it on your rig, or you’ll need an MFT camera like the Panasonic GH5s.

Either way, I’m going to have to try to get one of these!

Is This A Must Have $50 Cinematic Prime Lens?

By James DeRuvo (doddleNEWS) The Russians. Everyone is talking about the Russians. But not all of it is bad. Witness one filmmaker who says he wouldn’t go anywhere without his $50 cinematic lens that is […]

5 Tips to Keep Your Camera in Top Shape

How many of you actually take the time to give your cameras a good cleaning in between projects? Keeping your rig in top shape with a Spring cleaning a few times a year is the […]