One of the huge announcements last week at NAB was Apple’s partnership with Atomos in the development of a new codec that combines the uncompressed latitude of RAW with the widespread video capabilities of ProRes. ProRes RAW has been developed for Atomos external recorders Shogun Inferno, and the Sumo 19 Monitor, supporting the Panasonic EVA1. But there’s plenty more to it, and the company believes that it will become the new 4K standard moving forward. But do we really need it?

ProRes RAW combines the flexibility of RAW video with the incredible performance of ProRes. Import, edit and grade pristine video with RAW data straight from your camera sensor without slowing down your edit. These RAW files provide maximum flexibility for adjusting the look of your video, while extending brightness & shadow detail. The ideal combination for HDR workflows.

Atomos CEO Jeromy Young stated that ProRes Raw was needed in the video world because Raw was essentially an uncompressed still image format that was ported over to the video side of production. That was fine, initially, because video signals were 1080p, but as we have made the move t0 a 4K and inevitably an 8K video verse and beyond, Raw really doesn’t have the power to handle 4-16 times the data information. “It was not a video compression format,” Young said in an interview, “it made it difficult to move around after (in the workflow). So imagine if you could have the performance in ProRes, with the flexibility of Raw.”

It’s a huge transition to a workflow that allows more creativity. Ten years ago, we didn’t need that. But now, we do.” – Atomos CEO Jeromy Young

Young goes on to say that ProRes Raw solves all the problems that made Raw a difficult workflow, and that this new ProRes Raw is the Raw for the masses. To use, you would have to be using the Atomos Ninja Inferno, or the Sumo 19 external monitor recorders.  Atomos also has the new entry level Ninja V external monitor recorder, which will ultimately support the new ProRes Raw standard once more DSLR and Mirrorless cameras begin to support it. 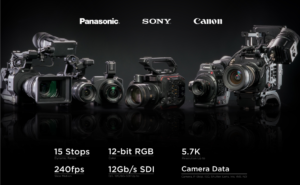 There is now a firmware update that adds support for the codec and you’ll need to update to that firmware. Then, you need a camera that can output Raw over SDI. These include the Panasonic EVA1 and Varicam LT, the Sony FS5, FS7, and FS7 Mk. II, and then the Canon C300, C300 Mk. II, and C500.

Young also says that once your hardware is updated, ProRes Raw will “play nicely” in the Final Cut Pro workflow because it obeys all the encoding rules that ProRes currently does. This means an image that is resolution independent and very efficient on the Intel platform. But with Apple planning to develop their own processors by 2020, it’ll be interesting to see how ProRes Raw is able to move over.

Meanwhile, looking at some of the test footage above, I have to say I’m pretty excited about ProRes Raw. The colors are bold, and the detail sharp. If it performs as well as Young says, it’s bound to be a game changer for ultra high definition shooting and beyond.

By James DeRuvo (doddleNEWS) If it’s Friday, odds are there’s some firmware being released and this week is no different. Panasonic is upping the game of their G series mirrorless cameras with some new features […]

By James DeRuvo (doddleNEWS) When Panasonic introduced the VariCam LT at a special event at the Director’s Guild in Hollywood back in 2016, they promised that as time went on, firmware updates could come online […]

by Larry Jordan Recently, James Duke was experimenting with 10-bit (HDR) video in both Final Cut Pro X (10.4.2) and QuickTime Player and found some strange behaviors. So, he sent me several questions about how […]