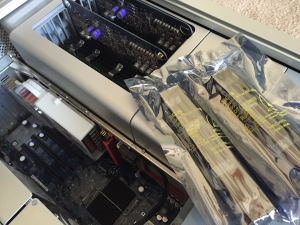 Dennis Radeke is a music composer for the entertainment industry, and was faced with the fact that his 2007 Mac Pro was – well – old. Usually at this point, it’s time to buy a new computer altogether, but Radeke decided to take a look at his computer.

“I did some of my own performance testing and considered the newest systems; but after looking at my options, I felt that with the right upgrades I could meet or even surpass the performance of a new computer and save money. It was pretty obvious that there was still a lot of creative work the two of us could do with the right enhancements.” – Dennis Radeke

I’ve also personally used OWC to upgrade my Macbook, which was slowly dying. It went from a 500GB HDD; 2GB RAM white plastic Macbook, to a 1.5TB drive, 16GB RAM machine. The optical drive was removed, and I also purchased an external enclosure to install it into.

The site provides easy-to-follow video tutorials and instructions, so even the neophyte can easily do the upgrades themselves. They’ll even send you a small toolkit with all the necessary screwdrivers to take the computer apart.

One caveat, however, is that your computer is still at the mercy of your CPU power. I had to eventually sell that Macbook and upgrade to a Macbook Pro, because some intense processing power was required for my live music rig. The laptop lasted a full six years, and is currently still going strong in my friend’s care ,where I suspect it will be good for another three or so years, since it’s not being used for any heavy lifting anymore.

If you do need to buy a new Mac, then I recommend purchasing a refurbished one from Apple. I used Geekbench to evaluate the relative processing power I needed, since newer doesn’t always mean faster. You could also buy a computer with a small hard drive and RAM to save money upfront, and then purchase upgrades from OWC, as sometimes that ends up being much cheaper.

The bottom line is that if you find your computer is incredibly sluggish, you may be able to save quite a bit of cash by doing a few simple upgrades, rather than springing for a brand new computer. But sometimes, you have to bite that bullet and buy something.

There are many great upgrade companies and website you can buy from. I have used, as have many of my doddleNEWS colleagues, OWC (link) for Mac. Check out this series by Jeremiah Hall on building a Windows NLE system here and here.