Artificial Intelligence is starting to do a lot of really scary things that could have a great impact not only on our industry, but our world. Already, with the advent of so-called “deep fakes” hackers have been able to create very convincing video clips of actors in roles they had never been in. But the next step, may be to create artificial actors that don’t even exist. In fact, it can already happen. Almost.

Videos and images are the next frontier of digital fakery – conscious, political manipulation of visual material will cause a shift in how we interact with the world  – face swaps, lip syncing or even puppetry and in the next year these devious dissimulations are only going to get more sophisticated. – Wired Magazine, on trends for 2019.

Deep Fakes are a cause of major concern and Wired Magazine says that even in its infancy, the ability to overlay someone else’s face on an existing performance is only going to get better and more prevalent in 2019. 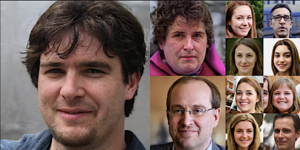 Now comes word that thanks to artificial intelligence, realistic images of people who don’t even exist can now be created in still image form. So realistic, that you can’t tell that they’re fake.

The deep fake photographs were part of a technique being developed by Nvidia Researchers who used a neural network architecture to generate variations based on existing faces, to create a fabricated human image that is virtually indistinguishable from the real deal. “(The architecture) leads to an automatically learned, unsupervised separation of high-level attributes (e.g., pose and identity when trained on human faces),” the researchers said in their white paper outlining the process, “and stochastic variation in the generated images (e.g., freckles, hair), and it enables intuitive, scale-specific control of the synthesis.”

That’s a lot of techno science speak to say look! Thanks to artificial intelligence, we can create faces of realistic  people who simply don’t exist.  And it’s causing quite an uproar with people concerned at just how powerful this new AI based technology is, and what it can be misused for. “Experts have been raising the alarm for the past couple of years about how (Artificial Intelligence) fakery might impact society,” write James Vincent of The Verge. 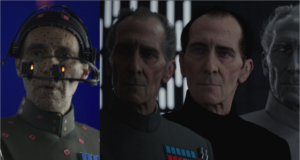 However, it could also be a powerful tool in Hollywood. Already we’re seeing how actors like Peter Cushing and Carrie Fisher can be digitally recreated for new performances in Rogue One, a Star Wars Story. In that, producers used a stand in actor to play both roles and digitally overlaid a computer generated image of the deceased actor’s face to bring them back to life (Fisher, however, passed away after her then her younger self was created for Princess Leia).

That was only three years ago, but it created such a ripple, that when Fisher passed away, there was a severe push to make sure Disney didn’t digitally recreate her for Episode IX.  And now, just three years later, AI can now create a realistic image of people that don’t actually exist, and the result may be movies starring not only deceased actors, but the creation of entirely new digital actors who don’t have to be paid for their work.

It’s a long way off to be sure, but this kind of technology, powered by artificial intelligence, is coming. And fast.

There’s a lot of bleeding edge technology experimentation going on over at NVIDIA. From proving the moon landing actually happened, to creating incredible 3D images with Ray Tracing in their latest video cards. But there’s […]

By James DeRuvo (doddleNEWS) Artificial Intelligence is poised to dramatically change the way we make movies. Not only from a workflow point of view, but also from a cinematic one. Will AI get to a […]