Not long before Peter Jackson hinted that he was officially directing an upcoming episode of Doctor Who for Series 10, The Hobbit director was candid about the follow-up J.R.R. Tolkien tent pole. He doesn’t go easy on himself either. But did he also throw another director under the bus in the process?

“You’re going on to a set and you’re winging it, you’ve got these massively complicated scenes, no storyboards and you’re making it up there and then on the spot. I spent most of The Hobbit feeling like I was not on top of it even from a script point of view…” – Peter Jackson, Interview on The Hobbit Blu-ray

Jackson said that the 3 1/2 years he had to prepare for The Lord of the Rings Trilogy, wasn’t available when the opportunity to helm The Hobbit was literally thrust upon him. Originally, he was just producing and fellow director Guillermo Del Toro was developing two movies based on the book. After a long series of delays, GDT left the project, Jackson was given the helm with practically no time to prep for any vision he had.

“Because Guillermo Del Toro had to leave and I jumped in and took over, we didn’t wind the clock back a year and a half and give me [much time] prep to design the movie,” Jackson admitted. “It was impossible, and I just started shooting the movie with most of it not prepped at all.”

Fortunately, he had plenty of infrastructure in place, thanks to the success of The Lord of the Rings and also what GDT had been developing. So Jackson began with a script that wasn’t finished, and with almost no storyboarded sequences.

“Because I don’t know what the hell I’m doing now, because I haven’t got storyboards and prep, why don’t we just finish earlier?” – PJ

Jackson admits he was working 21 hour days in a vain attempt to catch up and create something, but the result was taking what Del Toro had started with, and winging it the rest of the way without any clear vision of what he wanted. It was true set of the pants directing, and frankly, it shows in the first chapter – An Unexpected Journey. With The Desolation of Smaug, however, things seemed to improve, and it’s definitely the best film of the series.

“… that delay gives you is time for the director to clear his head and have some quiet time for inspiration to come about the battle, and start to really put something together.” – PJ, on the delay of the final film’s release (summer to December 2014)

Remember, The Hobbit was to be two movies only, but PJ, his writers, and producers agreed to make a third movie, The Battle of the Five Armies, and things went off the rails completely. It was so bad that JRR Tolkein’s son, Christopher, declared that he would never sell the rights to any more of his father’s work. Particularly “The Silmarillion,” which tells the tale of middle earth before The Hobbit in what Tolkein called “The First Age.”

Chris Tolkien edited together his father’s manuscript, which is known to be J.R.R.’s first novel, but also his last, so you can imagine it holds some serious sentimentality for the son of the famed author. 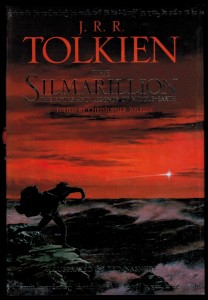 So why is Jackson fessing up to this now? Well, a hint may be in the announcement video that Jackson posted on Facebook yesterday about directing Doctor Who. If you look carefully, in the video above, a hardback copy of The Silmarillion is sitting on his table, right next to his four Oscars.

Now this can be just fanboy speculation of the internets, and some say it’s just Jackson trolling both Whovians and Tolkein fans. Either way, a director never really lays out something without trying to make a point.

So here’s my theory …  Jackson wants to direct The Silmarillion, not only to fulfill a lifelong ambition, but also as a way of apologizing to an author’s memory that he deeply respected and lost his way from with The Hobbit. So, he’s doing a mea culpa, in hopes of buttering up Chris Tolkien into considering it, even though Tolkien hated The Hobbit.

Since Chris Tolkien controls the literary rights to the J.R.R. estate, and said he never let another book it made into a movie, that’s going to be a tall order for even the Oscar winning director to acheive. But in Hollywood, you usually fail upward and you never, ever say never.

But did Jackson have to throw Del Toro under the bus to do it?