If you’re just starting on your filmmaking journey and haven’t played with FXHome’s HitFilm Pro, you really should. The all in one editing and visual effects app can help any budding filmmaker to hit the ground running in making your cinematic vision come to life, even if it requires CGI. But with version 11.o it adds a great feature called “Surface Studio,” which streamlines advanced titling that used to take hours, into mere minutes.

The big update to the FXHome HitFilm video editing and visual effects suite this time around is the introduction of Surface Studio, a visual effects plugins that mimics the textured title technique made popular by Video CoPilot’s Andrew Kramer who created tutorials called “Damage and Decay,” and “Cinematic Titles.” These tutorials show step by step how to create advanced motion titles with textures, but can take hours to prepare for the screen. Then there’s the costly investment of Adobe After Effects to accomplish it.

With Surface Studio, users of HitFilm can create similar titles in mere minutes. To create these rusty and weather worn look, users simply drop a clear PNG file onto the HitFilm timeline, which will instantly transform your text titles with either a smooth or rough surfaces on text or even any layers.

Surface Studio is also featured in FXHome’s expanding set of VFX Plugins called Ignite Pro, which can be used in concert with 10 of the most popular host software, including Adobe Creative Cloud, Apple Final Cut Pro X, Avid, Davinci Resolve and on both Mac and PC platforms.

In addition, in Vs. 11, users get four additional new plugins that include Exposure Pro, a powerful exposure and color grader/editor, DeHaze – which can bring detail to hazy or misty shots, Inner and Outer Glow effects, and Distance Field – which can boost your dynamic range by creating a greyscale map of each pixel based on it’s distance from the edge of a layer. 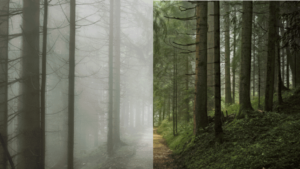 Additionally, FXHome has created a hybrid pay as you go subscription model, which enables existing HitFilm users to take a generation or two off without having to renew. So if a user sees an update and thinks … “yeah that’s cool and all, but not what I need right now,” then there’s no pressure to renew. You can continue to use your existing version of HitFilm, without having to re-up to get the next update that you don’t think you’ll need.

Then, when an update comes later in the year that you really want, you can re-up without penalty and still get the previous updates to get up to date. It’s a pretty slick way to give HitFilm users the  editing and visual effects features they need, when they need them.

HitFilm v11.0 is available immediately from the FXhome store and is priced at $299.00 USD.  Users an also save during FXHome’s annual Thanksgiving Sale. Through December 4, 2018, customers can save 33% store wide, including FXhome Pro Bundle, which includes HitFilm v11.0, Action, Ignite and Imerge. To take advantage of these savings, please visit https://fxhome.com/store#pro-thanksgiving-bundle.

You can also try before you buy with HitFilm Express, a free version of the pro version, which never expires and does just about everything Pro does. Give it a download and check it out.

It seems that lately, whenever Blackmagic ships a new version of DaVinci Resolve, it’s more than just an update, it’s practically a brand new app. And with their 15th major release of Resolve, there are […]

By James DeRuvo (doddleNEWS) Syfy’s Sharknado saga not only redefined what a cheeky, d-list monster flick looked like, it also created something called the “second screen experience.” This is where viewers could comment in real time on […]