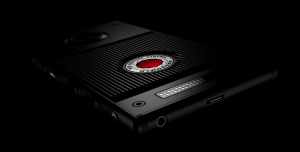 While everyone is raving about how virtual reality goggles changing the way we view the world, RED declared, “What if we don’t need VR glasses at all?!” And with that, Jim Jannard and his team introduced HYDROGEN, their modular hologram smartphone.

What is HYDROGEN exactly? Well that’s a good question. A standalone, fully featured, Android Smartphone, HYDROGEN ONE works as a virtual reality device. Designed to be used without VR goggles or glasses (they flat out say “wearable displays not spoken here”), HYDROGEN has a 5.7″ high resolution display with advanced holographic features for viewing of Stereo 3D content, RED’s holographic 4 view content (H4V), 2D & 3D VR, augmented reality, and mixed reality (which many say is the real future of the medium).

Think Star Trek’s Holodeck in your pocket.  Oh, and you can view regular 2D content as well. And I’m pretty sure it’ll make and take phone calls.

At the heart of HYDROGEN is RED’s H3O algorithm, which creates a kind of Dolby 5.1 in your headphones for 3D sound. RED says it will “assault your senses,” and matches the 3D virtual reality content of RED’s 4 View holographic content.

But HYDROGEN is just the beginning of an entire modular concept. HYDROGEN ONE is the foundation of of what RED hopes will be the future of a multi-dimensional media system. The system will be modular with a new high speed data bus, with future attachments that will enable mobile filmmakers to capture high quality virtual reality motion and still images through their RED Cinema Cameras. In addition to RED’s own stereoscopic holographic images, and then use HYDROGEN ONE to view and share them.

“HYDROGEN ONE will not only be the control center of the HYDROGEN SYSTEM,” the release says, “it will also integrate into a Professional RED camera program, working together with SCARLET, EPIC and WEAPON as a user interface and monitor.”

RED is also expanding their RED Channel on YouTube, which will also now showcase all their 4 view holographic content, and will give shooters the opportunity to showcase what virtual reality and holographic content that they make with HYDROGEN. That content not only includes 360˚ and virtual reality video, but also games, apps, and more. And being a mobile device, you can bet that HYDROGEN ONE will likely delve into streaming Live VR content.

From the looks of it, RED is not only branching out again into virtual reality, but they mean to blaze an entire new trail with a new way to create VR in the process. Figuring that RED users already have the foundation for creating the kind of virtual content that everyone hopes will be the future. Honestly, I still remain unconvinced that VR is the future, and YouTube’s announcement at VidCon of VR180 to eliminate the “back end” that usually goes ignored by viewers, only further cemented my bias against it.

But if anyone can cause me to keep considering if Virtual Reality is a viable cinematic option, it’s RED. They’re not afraid to dive into the deep end of the pool screaming “cannon ball!” and sending huge waves everywhere. So let’s just see where it goes. RED is also going to be Android, and I suspect we’re going to see an explosion of Android filmmaking apps that are long overdue.

HYDROGEN ONE will ship at the beginning of 2018, but pre-orders are available now  at RED.Com starting at $1195 for the Aluminum model, and $1595 for the Titanium version. And honestly, that’s not a bad price, when you consider that you’ll pay that much for a fully loaded iPhone after a two year contract. Additional Hydrogen Modules will be available as they are designed and released. For more information, download the PDF here.

By now, you know everything that there is to know about RED’s upcoming Hydrogen One Smartphone, except the shipping date! Well, the good news is, that the worst looks to be behind RED, as they […]