When you look at the success of professional filmmakers and you tubers like Casey Neistat, Peter McKinnon or Philip DeFranco, the temptation wanting to go full time on YouTube is alluring. But many top content creators on the platform are not only living the dream, but they’re finding out that it can be a nightmare as the never ending pace of staying fresh and relevant begins to take it’s toll.

Not everyone can be the next PewDiePie, to be sure, but the thing is, lightning can and does strike on YouTube, and if you’re unprepared for the sudden success and breakneck schedule, it can really burn you out.

Top content creators like Elle Mills (1.2 million subscribers), Bobby Burns (1 million subscribers), and the third biggest YouTuber with 30 million subs, Ruben Gunersen, have all taken to making videos recently, talking about how a perfect storm of YouTube’s ever changing advertising demonetization schemes, a toxic environment on social media, and a never ending breakneck pace of putting up fresh content is causing them to reach the breaking point, and wondering why they are miserable in their dream job.

“When I was a kid, all I wanted to do is be a YouTuber and make videos. So I worked my ass off and posted. Posted. Posted. But what would you do if you achieved your lifelong dream faster than expected? My anxiety and depression keeps getting worse and worse. I’m literally just waiting for me to hit my breaking point.” – Elle Mills said in a video from May 18.

Mills talks in her video about how she spends most of her time alone, coping with unrelenting pressure and anxiety of consistently putting out content for her subscribers.  Mills adds that she is living the dream, but she’s miserable doing it. It got so bad that even her friends pushed her to take a break and decompress, get the help she needs to remember why she wanted to do YouTube in the first place, and learn how to better manage her stress.

Even the most popular YouTuber, PewDiePie reached the burnout point. With a breakneck pace of uploading at least one video a day, the YouTube star took to video in 2016 to announce he couldn’t keep up the pace anymore.  “I’ve always put YouTube first, always, that’s my main thing,” the YouTuber said. “But keeping the vlogs up is just impossible at this point.”

It is strongly believed that YouTube accounts with more than 10,000 subscribers should post daily because YouTube’s algorithm favors frequency and engagement. – Julia Alexander, Polygon

The problem is, that when you’re just starting out, most of your money is made by Google AdSense. It’s tied to views, subscriptions, and YouTube’s fickle benevolence in sharing a piece of the pie. So YouTubers are working nonstop to put up content that is “relevant” and to keep their algorithm grade up. According to Polygon, YouTube’s algorithm favors frequency. The more you post, the more views and subscribers you get, the more adsense money you make. “So people upload, and upload, and upload, and upload, building a bigger fanbase and working non stop,” writes Polygon’s Julia Alexander. “And then the consequences of that hustle hit them like a ton of bricks.”

“It’s really frustrating to be a creator on YouTube because we don’t really know what’s going on,” PewDiePie said in a video about demonetization and views suppression. “I think YouTube is so scared of telling people what’s going on for media outrage and for people abusing the system, so they don’t generally keep us in the loop.” 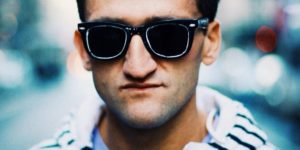 “I’ve often talked about the pressures of being a YouTuber and it’s a tricky thing to talk about because to find success on YouTube is to live the dream. Like, this is the ultimate. And if you achieve this kind of success on this platform, which so many people try to do, like, how dare you complain about it? It is difficult to talk about because unless you’ve been in this position, I think it’s challenging to empathize with it.” – Casey Neistat

Casey Neistat knows what the pressure is like. But so far, he’s managed to rise above the stress and depression by getting off the train from time to time. He keeps family a priority, collaborates with friends, and takes vacations. He’s not worried about losing subscribers, and manages to keep his stress level down. He also has a few people working for him to shoulder the load. The same is also true with DeFranco and McKinnon. All three are also diversifying their income to avoid being overly dependent on what is clearly a destructive financial incentive.

But all three are also older than the likes of Mills, Burns and Gundersen. So having a more mature outlook, an understanding the importance of having a social support system is vital to painting a positive mental outlook in stressful jobs like content creating.

There’s a reason why TV has seasons, while movies are made in cycles, and why filmmakers take vacations in between. It’s a stressful business that requires a tremendous time commitment. But it’s also a collaborative effort, something that some YouTubers feel left out of because they’re doing it all alone. Following the Neistat model, is one way to deal with it.

But it’s important to remember. No Filmmaker is an island.

Filmmaking 101: The One Cinematic Tool Every Filmmaker Needs

If you hang around here long enough, you’ll know that one of my favorite new filmmakers on the scene is Youtube content creator Peter McKinnon. With a youthful exuberance, and wisdom far beyond his years, McKinnon […]

Filmstro Releases 1,000 Music Tracks for Free Use on YouTube

By James DeRuvo (doddleNEWS) The biggest challenge creating an interesting short film or video online is to use music that you have the rights to, and that isn’t a cookie cutter clip from a stock […]