YouTube just turned up the heat in the streaming wars by taking their live TV streaming service, YouTube TV, nationwide.  Giving users up to six streaming accounts, DVR capability, and 60 channels for $40, the streaming giant makes the move just in time for the biggest day of the year … Super Bowl Sunday.

“From the very beginning, we focused our expansion around the local affiliates so we can deliver relevant local news and sports to YouTube TV members. With this expansion, we are providing complete local affiliate coverage with local feeds from all the four largest broadcasters in over 90% of the markets where YouTube TV is available.” – YouTube program manager Ben Moores 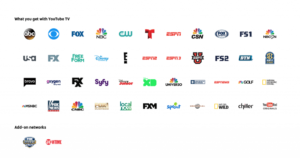 The nationwide package, dubbed the “skinny bundle” will be available in nearly 95 markets across the country, covering our 98% of the US media market. The bundle features 60 major channels including ABC, CBS, NBC ESPN, FOX and news services including CNBC and Fox News.

Having signed up over 225,000 new customers in the first three quarters of last year, YouTube TV is poised to continue to poach streaming users from established services including SlingTV, DirectTV Now, and others. Both have only added 1/3 that of YouTube TV in each of the three quarters of 2018, and all three suffered a little by announcing price increases late in 2018.  But price increases also have included new channels and programming. Hulu, meanwhile, has enjoyed increases of 375,000 live TV streaming subscriptions as well.

I’m a little dissatisfied with Sling since the streaming network dumped ABC in the Fall of 2018, while keeping other Disney channels including ESPN, Disney Channel, and others. This could be due to Disney planning their own service, and it’ll be interesting if Disney+ will include ABC in their package. CBS does something similar with CBS All Access.

Moreover, rolling out YouTube TV nationwide puts pressure on conventional payTV services, which have at best been able to slow down cord cutting, but with more than a million subscribers moving to streaming last year, more than in 2017, it proves that viewer tastes are changing to a more binge worthy, ala carte plan.

Here’s a quick breakdown of the benefits of YouTube TV:

But what I’ve also noticed is that streaming subscriptions are starting to look more like cable subscriptions, with various packages that include more programming. My SlingTV package, though it has added several channels that I do like, have also added channels that I never, ever watch. That looks terribly familiar to more of a cable like program, and I expect in the coming months and years, we’ll see those subscription fees climb. The very thing that caused cord cutters to leave cable in the first place.

So here’s what I think will happen. Since cord cutters are more than willing to pull the plug when it gets too expensive, I imagine they’ll move their subscriptions from one service to another as necessary. So Hulu’s gains in 2018, may be YouTube’s gains in 2019. Etc.

One thing is certain, they’re not going back to regular Pay TV.

By James DeRuvo (doddleNEWS) While YouTube is struggling with “apocalypse” as it evolves, Facebook has an opportunity to poach content creators that their competition is leaving in its wake. And they could do it with over […]